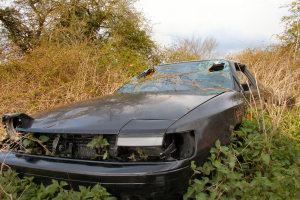 The vehicle had been left and burnt out, and was reported to the community protection team last December (2015).

Last December, Mr Payne was notified of his vehicle and its condition by the police and a community protection officer.

As the vehicle was on private land a request was made by the land owner for the council to take the appropriate action and Mr Payne was asked to arrange for the remains of the vehicle to be removed from the land within 14 days.

The maximum penalty for abandoning a vehicle on conviction is £2,500 and/or a three month prison sentence.

Clive Evans, community protection officer for Cheltenham Borough Council, said: “We are repeatedly asked to deal with abandoned cars and the community are keen for us to catch the people responsible. This prosecution shows that where there is evidence the council will issue fixed penalty notices and where appropriate pursue the matter through the courts.”

Councillor Andy McKinlay, cabinet member for development and safety, added: “This latest prosecution should send a clear message that we will always take enforcement action where evidence is available for us to do so."

See the council's webpages for more information on abandoned vehicles and how to report them.