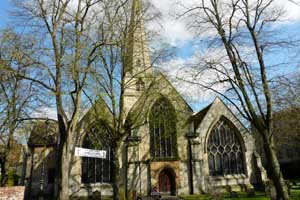 This year we have introduced a theme to Heritage Open Days.

It is 300 years since spa waters were ‘discovered’ in Cheltenham, when residents reputedly noted flocks of birds (pigeons maybe) gathering around a well. It took some years before the well was commercially developed and progress was slow until 1788 when George 111 came to Cheltenham for six weeks, with his wife and three daughters. From that date there was an explosion of activity and twenty six different wells have been documented by historians. Today there is only one surviving, in Pittville Pump Room.

Although Cheltenham is best known for its Regency terraces and houses, the buildings open at some time over these four days cover one thousand years – St Mary Magdalene Church in Uckington with its Norman arches; the medieval Cheltenham Minster; the classically inspired Pittville Pump Room from 1830; the mid to late 19th century Victorian Gothic Revival churches of John Middleton and others; Princess Hall in Cheltenham Ladies’ College from the late 9th century influenced by the Arts and Crafts Movement.

The walks and talks reflect life and people in Cheltenham over the years – 19th century Christian reformers; Cheltenham’s most famous son, Antarctic explorer Edward Wilson; and health care at Cheltenham General Hospital. And, Cheltenham life during and just after the First World War, with a walk and exhibition at Parmoor House, 13 Lypiatt Terrace.
All the buildings are open for free; places need to be booked on the walks (and most of these are taken already).

Notes:
History Heritage Open Days was established in 1994 as England’s contribution to the European Heritage Days and has since grown into the country’s largest heritage festival.
Heritage Open Days is England's biggest festival of history and culture involving over 40,000 volunteers. Every year over four days in September, thousands of events across the country invite you in to explore local treasures of every age, style and function. It’s your chance to see hidden places and try out new experiences – and it’s all FREE.

Nationally Heritage Open Days is coordinated centrally by the National Trust with funding from players of People’s Postcode Lottery. Locally, it is thousands of organisations and individuals from all walks of life who make the festival happen.