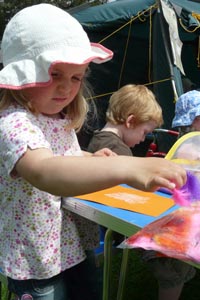 Some of Cheltenham’s finest landmarks are featured in collages crafted by local children as part of a competition hosted by the Mayor.

The collages – which are now on display in the Municipal Offices – are so impressive that judges had a tough time choosing winners.

The theme, ‘the spa waters of Cheltenham’ was chosen for the competition in celebration of the 300 years since the discovery of the spa waters.  Children of all ages were invited to take part through local schools and community groups including brownies and scouts.

The winner in the under 5 category was Evelyn Powell, aged 4 who had based her collage around an eye-catching pink and sparkly ‘300’ design. For those aged 5-7, a group from St Peter’s beavers caught the attention of the judges with their winning entry in which they used pasta shapes to recreate the Town Hall.  The winners of the aged 7-10 category came from Gloucester Road Primary School; a group of children used glitter, feathers, buttons and paint to feature the Cheltenham coat of arms, Pump Room and River Chelt in their collage.

A canvas painting of the Pump Room from St Peter’s scout group won the aged 10-15 category and a Harry Palmer from Belmont Special School won from a number of entries submitted by his school, with his design of a specially crafted pigeon using newspaper cuttings.

The Mayor will be visiting the winners to give them their prizes and many other children will receive certificates for their designs.

Mayor Chris Ryder said:  ‘’All of the children who took part used their interpretation of the theme and produced truly impressive pieces of art, which they should be proud of.  My thanks goes to all those who took the opportunity to be a part of this competition which marks a very special time when we recognise 300 years of the town’s spa waters.’’