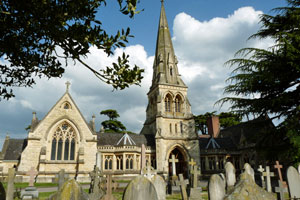 At the start of 2016, the Royal College of Nursing (RCN) began their year of centenary celebrations, showcasing inspirational nursing and the people involved. As part of this, in October, the council was contacted by the RCN to coordinate a commemoration for their first president who is laid to rest at Cheltenham Cemetery and Crematorium.

The mayor and the president will be unveiling the refurbished headstone and border of winter foliage to complement the graveside, with president of the RCN, Cecilia Anim, laying a wreath.

A well-respected and honoured nurse, Miss Browne’s career spanned 23 years during which she worked in all the large military hospitals at home and abroad and served in three military campaigns. For her time served in the Egyptian War and Sudan campaign, Miss Browne’s accomplishments were awarded with the Khedive's Star, Egyptian Medal and Bar, followed by the Royal Red Cross for her service in South Africa.

In 1918, Miss Browne was appointed a Dame Grand Cross of the Military Division of the Order of the British Empire.
Dame Browne then in 1922, received the honour of being the first to become president of the Council of the College, which later became the Royal College of Nursing.
Dame Browne retired to Cheltenham in 1927, and retained a keen interest in nursing and particularly the welfare and progress of the military services until 13 August, 1941 when she passed away.

Cheltenham mayor, Chris Ryder says: “Dame Sidney Browne was an extraordinary woman and nurse. I’m delighted to unveil her restored headstone and commemorate her life and accomplishments at her final resting place in Cheltenham and to also pay tribute to the RCN for their great work.”

RCN president, Celia Anim, continues: “The role of RCN president is one steeped in history, and it is an honour to pay tribute to Dame Sidney Browne, the first person to hold the office.

“Dame Sidney was a nursing visionary. The work of the RCN today is only possible because of the determination and dedication she and her founding colleagues showed 100 years ago.

“Through these events we preserve her memory and reaffirm our commitment to supporting nurses and nursing for the next century and beyond.”

Dame Sidney Jane Browne, GBE, RRC (born 5 January 1850 and died in 1941) was the first appointed Matron-in-Chief of the newly formed Queen Alexandra's Imperial Military Nursing Service. After she retired from the QAIMNS (later known as the QARANC) she was appointed as Matron-in-Chief of the TFNS/TNS. Browne was appointed a Dame Grand Cross of the Military Division of the Order of the British Empire in 1918.

In 1922 she became the first President of the Royal College of Nursing in 1928.

During the 10 years of active work Dame Sidney gave to the profession after the war, she was awarded all the tributes due to an elder statesman, the Grand Cross of the Order of the British Empire, the Freedom of her town, an honorary degree, the office of president of the College of Nursing, and the International Red Cross Medal.