Residents thanked for recycling their waste 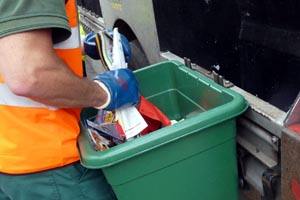 Cheltenham residents are thanked by Cheltenham Borough Council for their recycling efforts during 2016.

Over the year, residents have saved an anticipated 10,300 tonnes of waste from going to landfill saving over half a million pounds in landfill tax charges alone.

Over 5,000 tonnes of kerbside recycling material has been collected and over 3,000 tonnes of recyclable waste was received at the bring sites and household recycling centre throughout the year. Residents also recycled over 2,300 tonnes of food waste by using their food waste caddies.

Cllr Chris Coleman, cabinet member for clean and green at Cheltenham Borough Council, says: “Recycling plays a vital part in helping to reduce the amount of rubbish that is sent to landfill. Our residents really are doing us proud which is why we’d like to take the time to thank them for their efforts.

“Of course we’d like to do even better in 2017 and we’re asking local people to help us again by recycling even more.

“We are carrying out a service redesign this year which will allow us to make further improvements and enable more items to be collected from the kerbside.

“It's also incredibly important to reduce the amount we consume in the first place and reuse items wherever possible.”

For more information on waste and recycling in Cheltenham, visit the council’s website: www.cheltenham.gov.uk/waste