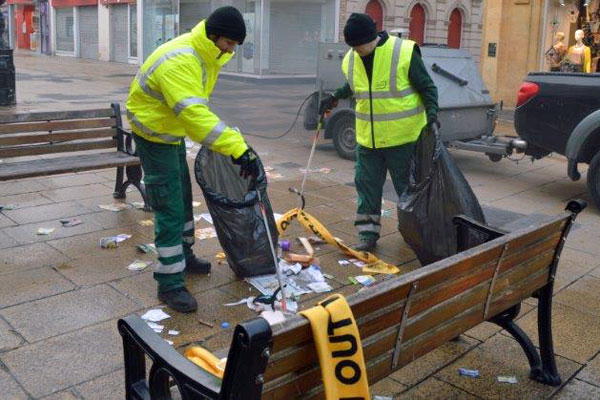 Free promotional printed material can only be handed out with permission from the council from 1 February 2017. Anyone wishing to distribute items such as leaflets in this way will need a permit.

The introduction of the new scheme, which aims to protect the appearance and cleanliness of the borough, follows a public consultation last year. The problems associated with the distribution of free promotional material have been particularly evident during ‘Gold Cup Week’ and in the town’s night time economy.

Until now, the council has not had any formal powers to regulate the distribution of items such as leaflets, magazines, stickers and scarves, which are often left on the streets causing a littering issue.

The council will now be able issue fines, or prosecute those who do not comply with the rules by causing a nuisance through their promotional activities. The authority will also be able to condition the distribution of such material and refuse permission to people who persistently break the rules.

There are a number of statutory exemptions for promotional activities associated with charitable, political and religious causes.

All the information required about the scheme and how to apply for a permit can be found on the council’s website.

Councillor Andrew McKinlay, cabinet member for development and safety, said: “There has been a steady increase in littering associated with promotional activities in Cheltenham at all hours of the day and night. This problem is particularly evident at key times of the year, often coinciding with festival events.

“Up until now, the council was powerless to formally deal with the effects of promotional activity giving rise to littering and could not control the number of promotional staff in an area, which can cause a nuisance to businesses, visitors and residents.

“We understand the importance of promotional activity for businesses and individuals and are not wholly averse to this type of activity, so the scheme has been designed to be proportionate in its approach.”