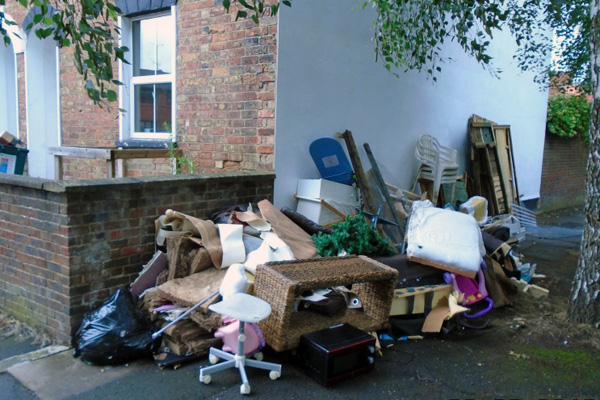 A complaint was made to the community protection team last June indicating that a large amount of fly tipped waste had been deposited at the end of Nailsworth Terrace and a link footpath leading through to Poole Way, Cheltenham.

A community protection officer visited the site and made local enquiries. Information from the enquiries identified where the waste had come from and the people responsible for leaving it.

Mr Duplessis and Mr Gobey were both interviewed under caution by a community protection officer when they both admitted depositing the waste. Mr Gobey indicated during the interview that he was helping his neighbour in moving house at the time they left the waste.

Mr Duplessis and Mr Gobey both received fines of £150 and were also ordered to pay costs of £220 and a victim surcharge of £30 that equates to a total of £400 for each to pay.

Mr Duplessis advised the Magistrates that he was already paying a fee of £150 for Ubico, the council’s environmental service provider, to clear the waste from the street.

Clive Evans, community protection officer said: “Taking such action goes to show that the council will not tolerate fly tipping and although there was no evidence found within the waste we were able to carry out investigations and identify the culprits and bring them to task.”

Cllr McKinlay, cabinet member for development and safety continued: “This course of action demonstrates that the council takes the blight of fly-tipping seriously and will take action against those who flout the law.’’