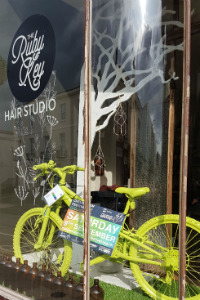 The council, supported by volunteers from The Butterfly Garden and Cheltenham residents, have been spraying, painting and placing zingy lime green bikes around the town.

Festival organisers have been delighted with the response from residents who have donated and painted bikes in lime green. Everyone is now being invited to explore the zingy lime green bike trail and snap a selfie with one of the lime green or arty bikes tagging your photo with #bikespotter, offering the chance to win hospitality tickets at the Bloor Homes Cheltenham Festival of Cycling. Entries close on 7 September.

Cllr Rowena Hay, cabinet member for finance says: “We’d like to thank the residents and organisations of Cheltenham who have donated a great many of the bikes that have been upcycled for the festival.”

Tracey Crews, project sponsor of Bloor Homes Cheltenham Festival of Cycling continued “It’s fantastic that we can see so many vibrant lime green bikes dotted around the town waiting to be snapped by residents and visitors.

“We hope #bikespotter competition will have a great many entries and that families have fun with the free treasure trail. I would like to thank the volunteers who responded through social media requests which called out for extra painting hands. We had a couple of hot days getting covered in paint, but we are delighted at the result.”

In addition, this bank holiday weekend will see the launch of a free fun treasure trail for families to complete. There will be 11 bikes which will be marked with orange pins on the festival website map. Each of these 11 bikes will have a letter tagged to them (multiple letters in some locations) so that families can enjoy a treasure hunt to find all the letters.
Ending at the Wilson, participants are asked to hand in their form and pick up a small prize.

Kevan Blackadder, BID director added: “The green bikes are being well received by businesses and have already caught the attention of many. The free fun treasure trail is a welcome activity that many will no doubt enjoy.”

Further competition details can be found on the Cheltenham Festival of Cycling website www.cheltenhamcyclingfestival.org.uk

The fun free treasure trail has 11 locations which are pinned on the Cheltenham Festival of Cycling map. Families can download the treasure trail form from the website www.cheltenhamcyclingfestival.org.uk  and ‘hunt’ for all the letters with the final letter found at The Wilson, where a small prize can be claimed.