A new £67,500 BMX track in Leckhampton could help to unearth future Olympians like Liam Phillips or Shazane Reade 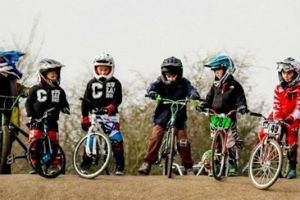 Funding from Cheltenham Borough and Gloucestershire County Council has helped to install a new ‘pump track’ at Burrow’s Fields for BMX riders to develop their skills on.

A pump track consists of a series of rounded bumps and can be ridden either individually by novices, or jumped in pairs by more advanced riders.

The track can be enjoyed by people of all abilities, although it is advised that users are able to ride, corner and brake whilst in a standing position.

With BMX racing now a regular fixture on the Olympic circuit and BMX Freestyle Park making its debut at the Toyko games in 2020, there’s no better time to strap on your helmet and get on your bike.

The project was led by local resident Nikki Powell and her family with support from other local residents and the Leckhampton Pump Track Users Group.

Nikki said: “This is a bike only park which will give young riders a safe place to build up their confidence away from the roads.

“The park is an ideal place for young and old to come together and keep active, hopefully we see lots of people down here on Saturday for our Open Day.”

The county council put £15,000 of funding into the scheme after local county councillor Iain Dobie was approached by the group. This was made up of £10,000 from the council’s ‘Active Together’ fund, spread over two years, and a further £5,000 from the children’s activity fund.

Cheltenham Borough Council has put £52,500 of funds specifically dedicated for youth provision into this scheme, as well as overseeing the build on the project.

Cllr Chris Coleman, cabinet member for clean and green environment at Cheltenham Borough Council, says: “Pump tracks have proved to be very popular in other parts of the country and this is a first for Cheltenham.

“The vision for the track has really caught the imagination of local families and children and we’re delighted that it’s now open. Pump tracks are great fun and provide hours of healthy fun for young people.”

As the track has developed, the councils have also made improvements to benefit other users of the area. Better parking and a new crushed gravel track mean dog walkers and runners alike can enjoy the area too.

Cllr Iain Dobie, local county councillor for Leckhampton and Warden Hill, said: “This is a brilliant example of a ‘citizen’s initiative’ which has come to fruition. Local campaigners have worked to get this off the ground and I’ve been pleased to back their vision.

“We’ve listened to what the local residents wanted from these improvements. I’m sure they’ll agree we’ve now got a brilliant new facility for the community to enjoy.”

Cllr Tim Harman, cabinet member for public health, said: “Our children’s activity fund has been used all across the county. It has provided many community groups from sports clubs to scout groups and parish and town councils and schools with funds to grow sports and physical activity.

“This new BMX track is a great addition to Leckhampton and will encourage people to use their bikes to get a really good workout whilst having fun at the same time.”

The BMX track will be officially opened on Saturday 7 October at an open day running from 12pm to 4pm.