Top of the plots 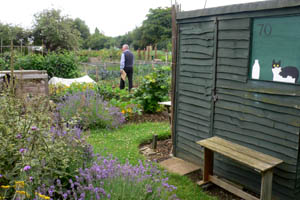 Fiona Warin, allotment officer for Cheltenham Borough Council, said, “It was a very enjoyable evening and great to see all the hard work and effort being rewarded in this way. The competition promotes high standards in allotment gardening and aims to encourage everyone to make the most of their allotment.”

Top of the Plots in the ‘new tenant section’, and awarded the Margaret Horne trophy, were joint winners Lesley Dawson from Reddings Road site and James Mclean from the Asquith Road site. Both were recognised for their significant achievements in their first year on an allotment. Terry and Jackie Pyke were awarded the Kenneth Walker trophy for ‘best new tenants’ at the Midwinter site.

In the ‘general section’, top spot went to previous runners-up Ben Stokes and Mervyn Snow. Their immaculate and highly productive plot was recognised for many environmentally friendly features. In the ‘senior competition’, Jenny Spooner from Reddings Road was awarded first place and the Miss F L Carter Cup. Her plot featured a fantastic range of fruits and vegetables in super condition and the plot was beautifully laid out.

In the ‘best kept site’ competition, Reddings Road site triumphed again, winning the Thornton Shield. Their site warden, Brian Bailey, was awarded the Warden’s Cup and also the Ken Townsend Rose Bowl for having the best allotment overall in the whole competition.

Other awards included the Hester’s Way Councillors’ Cup, awarded to Emile Grey at the Hayden Road site for his contribution to his allotment community and Rosemary Smith was awarded the Chris Coleman Cup for Volunteer of the Year for her work at the Terry Ashdown site.

The final award, for ‘best community allotment’, went to People & Places at the Hayden Two site. They gave a short presentation about their inspiring work that has helped and supported many people over the last 17 years.

Cllr. Rowena Hay, cabinet member for finance and a competition judge, continues, “The standards were definitely higher this year and we judged a great many productive and well-presented allotments. Well done to everyone, particularly the winners, and thank you to everyone who came along to support their fellow allotment holders at the awards presentation.”

Notes: For more information about allotments in Cheltenham, visit the council’s website: www.cheltenham.gov.uk/info/64/allotments