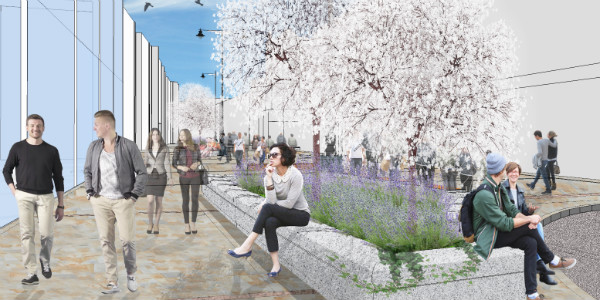 Plans to refresh Cheltenham’s High Street have taken an exciting step forward now that a contractor has been appointed to deliver the first phase of work. North Midland Construction will start on site this month.

The designs, which were recently on show in a public exhibition, reveal a transformed High Street.  Plans will see the existing mix of concrete and tarmac infill replaced with natural stone paving, new seating, trees and a performance space. The new paving will be complimented by raised beds, planted with large trees and shrubs and incorporating new seating and other street furniture.

Cllr Andrew McKinlay, cabinet member for development and safety, said: “’This is a great step forward and we are pleased to have appointed a contractor so that our plans can now progress to revitalise the High Street. These works are part of the wider vision for the town centre and focus on creating a better quality environment and improving connectivity.

“A lot has been happening behind the scenes to get to this point and we are excited about the coming weeks when part of the High Street will begin to look very different, and in the long term, offer a considerable boost to Cheltenham’s economy.

“North Midland Construction has been appointed due to their strong bid including an impressive portfolio of similar projects which they have successfully completed elsewhere in the country.”

Kevan Blackadder, director of Cheltenham Business Improvement District (BID), said: “The councils are responding directly to the wishes of town centre businesses by investing in such much-needed work. It will not only improve the High Street but help towards creating an improved public space, which will benefit the whole town centre.”

The improvements – due to begin in May for completion in September - will initially be focussed on the High Street between Rodney Road and Cambray Place and plans are linked as closely as possible to the opening of the new John Lewis store later in the year.  Investment of £725,000 has been agreed by Cheltenham Borough Council and Gloucestershire County Council with some additional financial support being provided by the European Structural and Investment Fund.

Keep up to date with the High Street improvements at www.cheltenham.gov.uk/high-street-refresh