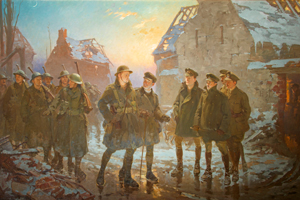 The return of Cheltenham's 'Forgotten' WW1 Painting Exhibition, running at the Open Archive, Wilson Museum and Art Gallery from 9 June 2018 to 31 March 2019.

This Saturday (9 June) sees the return of Cheltenham’s official World War I memorial painting by Fred Roe RI to The Wilson Art Gallery and Museum and an exhibition of the story behind the painting.

The commemoration exhibition, entitled ‘At Last Fighting is Over’; The end of the First World War on the Front and in Cheltenham, offers the first opportunity to see the painting at the museum for many decades.

The painting entitled ‘A relieved platoon of the 1/5th Gloucesters marching in from the trenches past headquarters at Hebuterne 1916’ contains five Cheltenham men, out of seven portrayed, from the battalion which contained the first soldiers (Territorials) to leave Cheltenham the day after war was declared. The painting was commissioned in 1920 to remember the people of Cheltenham who gave their lives in WW1, one of whom in the painting was Lt Cyril Winterbotham who died on the Somme in August 1916. His brother “Percy” is also in the painting and was a sitting councillor in Cheltenham when he enlisted. Their sister, Clara Winterbotham was chairman of the Art Gallery and Museum Committee which commissioned the painting. At the time she was also the town’s first lady councillor and in 1921 became Cheltenham’s first lady Mayor.

Three grandchildren of Major Noel Huxley Waller, one of the officers featured in the exhibition, attended the preview of the exhibition where their grandfather’s medals, including his Military Cross, will be displayed. He was awarded the Military Cross for his many ingenious inventions including a grenade launcher mounted on a rifle.

Neela Mann, exhibition host said “The return of this painting for the “Cheltenham Remembers” project shows that the town is respecting Kipling’s words “Lest We Forget”. The exhibition is a way of telling Cheltenham people the story behind the painting and of the soldiers’ lives on the Somme in 1916.

Councillor Flo Clucas, cabinet member for healthy lifestyles said: “The five Cheltenham men shown in the picture represent all of those, who went to war. Sadly, like Cyril Winterbotham, many Cheltonians did not return.

‘The freedoms we enjoy today are a legacy of their sacrifice and that of the Cheltenham casualties commemorated on the War Memorials.

‘Our remembrance is our commitment to them and our acknowledgement of their bravery and love for Cheltenham and its people.”

There will also be other works exploring what was happening during the war and immediate aftermath including items from Cheltenham Ladies’ College Archives and the Wilson’s own collections. This will be complemented by a web-based exhibition showing the Wilson family’s wartime diaries and letters, some of which have been newly transcribed for the project.

A full programme of Cheltenham Remembers events which mark the centenary of the First World War is available at cheltenhamremembers.org.uk

For enquiries about opening times and admission at The Wilson Art Gallery and Museum visit www.cheltenhammuseum.org.uk

The painting is by Fred Roe and was commissioned in 1920 as the official war picture for Cheltenham. The painting is owned by Cheltenham Borough Council and has been returned from the Soldiers of Gloucestershire Museum where it has been on display for around 23 years. It will be on display at the Wilson alongside an exhibition about the painting created by Neela Mann of Cheltenham Local History Society. This will form part of a wider exhibition at the Wilson entitled At Last Fighting is Over which features items from the Wilson’s own collections, Cheltenham Ladies’ College Archives and other contributors that gives a snapshot of life in Cheltenham during the latter years of the First World War and its aftermath. Displays are supported by a grant from the Heritage Lottery Fund and Cheltenham Borough Council.