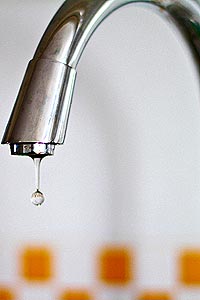 With the region basking in the hottest June for 40 years, Severn Trent has confirmed that, while it always expects to see an increase in demand for water, usage has been significantly more than normal.

Customers are using millions of litres more water every single day as they enjoy the sun and high temperatures. This has been the case for several weeks now and, with the hot weather set to continue, the company is asking customers to use water carefully, to help avoid any issues with pressures dropping during peak demand in the mornings and evenings.

Severn Trent has confirmed that they have plenty of water stored and reservoir levels are healthy. That water however, then needs to be treated through its treatment works before being pumped into supply.

As fast as it is being produced and put into supply, it is being used by customers which can cause isolated areas of low pressure for people.

The company has increased its production capacity by millions of extra litres a day, but it’s also asking to customers to be neighbourly and help to use their water carefully to try and prevent low pressure for their communities.

They are specifically asking people to:

1.     Put their garden sprinklers away – a sprinkler can use as much as 1,000 litres of drinking water in just one hour – which is more water than a family of four would normally use in a whole day

2.    Take a shower rather than a bath - It uses 40 litres less water and it’s quicker, which means you can get back out and enjoy the sunshine

3.    Avoid washing their cars, but if they have to use a bucket and sponge rather than a hose. If you clean your car for 30 minutes you’ll use 50 times less water with a bucket instead of a hose

Water efficiency manager, Doug Clarke explained, “Demand for water is massively up thanks to several weeks of extremely hot weather. While we have lots of water available and our reservoir levels are healthy and we’re putting millions of extra litres of water into the system, people are using water as fast as we can treat and pump it into supply.

"This is particularly the case during peak demand in the morning and evenings when we want to ask customers to restrict their supply so we can avoid areas of low pressure. We know how tempting it is to fill the paddling pool up, or get the sprinkler going, but to put things into perspective, a sprinkler can use as much as 1,000 litres of drinking water in just one hour.

“We urge everyone to play their part and be extra careful with their water, especially during peak times.”