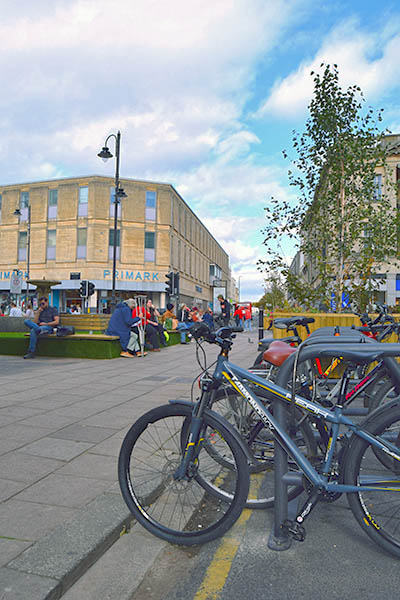 Introduced as part of the Cheltenham Transport Plan (CTP), bike stands, seating, planters and artificial grass have been temporarily installed in the Boots Corner area to create an enhanced space for people to enjoy. Research is now underway to understand the way people are using the new features which have been put in as a trial around the Boots Corner fountain.

The benefits of walking and cycling are widely recognised and through the temporary changes, the council is aiming to improve the experience for those who walk and cycle into town.  A 2016 survey of visitors in the town centre, commissioned by the BID, shows that less than one in four people come into the town centre by car, with the majority arriving by bus or on foot.

The council is now gathering data to understand how widely used the new features around the Boots Corner fountain are.  The data will include footfall, a bicycle count (both in use and parked up), numbers of those using the seated areas, and wheelchair and mobility scooter use. In a three stage approach, data was gathered: 1. before the trial began; 2.after the new features were put in to the area and; 3. a sample will also be taken following an initial settling in period. The data will be analysed and will inform the consultation process, together with data including traffic monitoring and footfall in other areas of town.

Councillor Andrew McKinlay, cabinet member for development and safety said:  ‘’The new features appear to be incredibly popular; people are eating their lunch on the benches, gathering to chat, securing their bikes to the new racks and generally enjoying the space in a way they couldn’t have before. We would like walking, cycling and public transport to become the natural choices for short journeys and it appears that people are changing the way they use the town centre space.  It will be interesting to see the data and full analysis which will form part of the overall review of the trial.’’

As part of the council’s commitment to encourage and enable healthy, active lifestyles, the council is in discussion with local organisations dedicated to supporting and promoting more walking and cycling.

James Cleeton,  England Director at Sustrans South said: ‘’To help improve the economic vitality and air quality of city centres, local governments around the world are increasingly putting people first and opting to restrict the use of vehicles in town centres.
‘’Where this has been done and improvements have been made to public space, the evidence tells us that footfall increases and retail sales rise.

‘’By following this movement Cheltenham is putting the health of its economy, its people and the environment first which benefits the community as a whole.’’

Chair of Cheltenham and Tewkesbury cycling campaign, Andre Curtis, continued: “The final phase of temporarily closing Boots Corner appears to have reduced traffic in the central area, making it easier to walk and cycle. The Boots Corner closure itself has made the high street much more pleasant for shoppers and visitors. As it is a trial there may be some adjustments to be made including to signage around the town centre.

“The reorganisation of traffic flows in central Cheltenham has given major benefits to people using bikes. Journeys are more direct with major barriers to cycling removed and the central area is much more permeable.

“Few other towns would still have a busy traffic route dissecting the main shopping thoroughfare as Cheltenham has had until this trial closure of Boots Corner.”

Further information about the health benefits of walking can be found on the NHS website.

For more information about the scheme, visit the council’s website www.cheltenham.gov.uk/transport-plan Residents and visitors are encouraged to share their feedback about the trial scheme formally at gloucestershire.gov.uk/ctp.

Media enquiries on the development and aims of the Cheltenham Transport Plan should be made to the communications team, Cheltenham Borough Council, 01242 264154, email communications@cheltenham.gov.uk

Improving the environment and traffic management, and boosting the local economy is at the heart of the Cheltenham Transport Plan (CTP), Cheltenham Borough Council’s (CBC) vision for a better town centre.

Gloucestershire County Council (GCC), as local highway authority is making the changes to the streets to enable the scheme.

Residents and visitors are encouraged to share their feedback about the trial scheme formally at gloucestershire.gov.uk/ctp

All walking tours can be booked using the Visit Cheltenham website or by calling 01242 2374.

Additional notes
The Cheltenham Transport Plan has been split into phases to limit disruption. Phases one, two and three are now complete and monitoring shows they are working well.

Phase four focuses on changes to movement through the area known locally as ‘Boots Corner’.

During the trial, general traffic is prohibited from the section of Clarence Street through ‘Boots Corner’, North Street, Clarence Parade and Pittville Street to Imperial Circus. There are exemptions for buses, taxis, cycles, loading or unloading between 6pm and 10am and some other exempt vehicles such as emergency services.

Public transport needs to be allowed right into the centre as we know that more people come into the town centre by bus than any other means. The scheme will allow for better connectivity between the High Street and Lower High Street for pedestrians, cyclists and public transport.