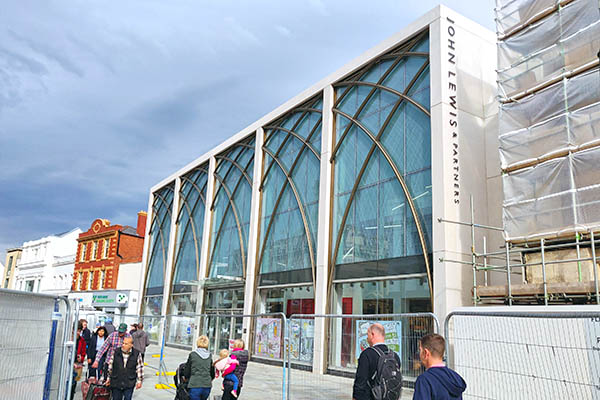 Excitement is building for tomorrow when John Lewis & Partners Cheltenham will be opening its doors to the public at 10am.

The council eagerly awaits the opening of John Lewis, as Cheltenham’s High Street continues to thrive, reacting to the demands of the customer.

Kevan Blackadder, BID director, says: “The store’s arrival is such great news for the whole of the town. Not only will people be coming to Cheltenham to shop at John Lewis, but they’ll also visit and spend money in our other shops and businesses.

“I think it will also bring some shoppers to Cheltenham for the first time. Many people who live north and south of Cheltenham have had to go to Cribbs Causeway for John Lewis in the past. They will now be able to enjoy this store and everything else Cheltenham has to offer.”

Tim Atkins, managing director of place and growth for Cheltenham Borough Council, says: “The John Lewis store is completely redefining the retail experience and Cheltenham is leading the way for shoppers. People will be pouring into Cheltenham and are going to want to come back again and again.”

Cllr Steve Jordan, leader of Cheltenham Borough Council, says: “Lots of people have been looking forward to this for a long time and it’s finally arrived. It’s a big day for the town and very much part of our future plan for the high street, and we’re keen to make sure that the town’s economy benefits.

“We’ve got the Brewery doing well at one end of the high street, and now John Lewis opening at the other end, as well as the Promenade doing well. We’re investing at the same time in the upgraded high street with the new seating, trees and paving just outside which is looking good and due to be finished shortly. The town continues to grow as a destination for shoppers with Urban Outfitters, The Botanist and Next also investing here. ”

To keep up to date with all the enhancements to the high street visit www.cheltenham.gov.uk/urbandesign

Cheltenham’s high street has been transformed with stunning locally sourced natural stone paving, new seating and trees. In the next few weeks the temporary planters with underlying tarmac surface outside John Lewis will be replaced with stone paving and permanent planters.

The positive improvements and changes to the high street are part funded by the European Structural and Investment Funds.

The Forest Pennant stone was sourced locally from the Forest of Dean.

Other areas of tarmac at the boundary of the works will be replaced with stone as the council looks to continue with further improvements along the High Street.

The project has received £60,000 of funding from the England European Structural and Investment Funds Growth Programme 2014-2020.  The Ministry of Housing, Communities and Local Government and the Department for Work and Pensions (and in London the intermediate body Greater London Authority) are the Managing Authorities for European Regional Development Fund and European Social Fund funding through the Growth Programme, funds established by the European Union to help local areas stimulate their economic development.  By investing in projects the funds will help to support innovation, businesses, skills and employment to improve local growth and create jobs. For more information visit https://www.gov.uk/european-growth-funding