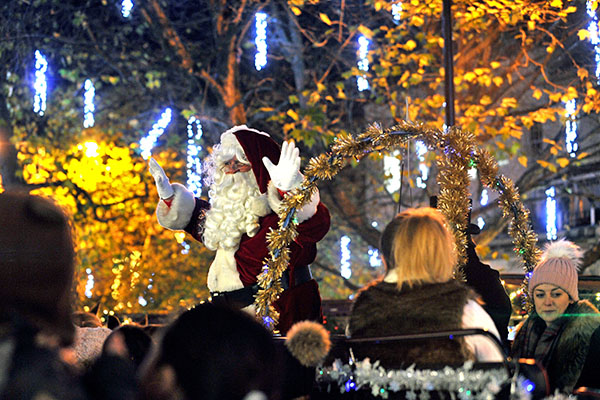 Prepare to be dazzled, excited and delighted as a battle of good versus bad unfolds in Cheltenham.

Will you support the Wicked White Witch or Santa as they battle it out to turn on the Christmas Lights? The light switch-on is divided into three zones; The Brewery Quarter, Regent Arcade and The Town Centre, each with a unique theme and entertainment.

This interactive, panto-style street theatre production will move through the town centre with a story inspired by The Lion, The Witch and The Wardrobe. Follow as the story unfolds through Cheltenham town centre, with the White Witch and her six trolls trying to stop Christmas while Santa and his six elves try to outwit her to turn on the Christmas Lights. Pantomime-style interaction will entertain the kids as an illuminated parade progresses through Cheltenham.

The show will start in Imperial Gardens at 4.30pm and then proceed to Montpellier, back down the Promenade, along the High Street to The Brewery Quarter and Cambray Place and then back through Boots Corner to Imperial Gardens for a thrilling showdown just before 6.30pm. The winner will turn on the Christmas lights which this year are bigger and better than ever!

As well as being a destination for the main theatre event (as above), live music, singing, dancing and festive cheer abound in The Brewery Quarter with a The Greatest Showman themed celebration. From 4pm – 7pm party bands Just Shut Up and Dance, Greatest Showman and headliners Tuxfizz will be on stage with the lights being switched on midway through. As an added bonus, The Brewery Quarter will also have a Christmas Market running on the 24 & 25 November, right in the very centre.

With something for the adults, Cheltenham boy Frankie Foster of Love Island fame is appearing along with family favourite characters and Father Christmas. The switch on will happen at around 4.30pm, but Father Christmas will be wandering through the Arcade throughout the day from 10am.

Find out more about the Visit Cheltenham plans for this Christmas.