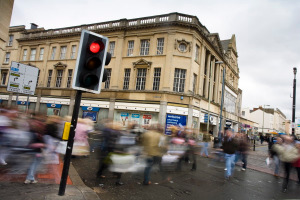 Following feedback from residents and businesses, changes are being introduced to phase 4 of the transport plan – ‘Boots Corner’ – as it enters its final six month trial period.

The trial makes provision for the scheme to be adjusted in response to feedback and data gathered since it began in June 2018. The changes, which will go live from this June, are in response to common themes raised during the trial, including blue badge provision and access for businesses on Clarence Parade and parts of Clarence Street.

Councillor Andrew McKinlay, cabinet member for development and safety said: ‘’I welcome these changes being implemented by colleagues at GCC as a positive response to the feedback on the trail to date. We are grateful for the patience of the local traders and trust that these changes respond to the concerns that they have raised.’’

The work is all part of a wider strategy to improve the town centre and the borough council shortly plan to release a 3D ‘fly-through’ animation to showcase how it could be possible to extend the positive improvements already visible on some parts of the high street.

In response to these changes, Cheltenham Borough Council and Gloucestershire County Council continue to welcome feedback which can be provided through the online survey at www.gloucestershire.gov.uk/ctp-phase4

Improving the environment, traffic management and boosting the local economy is at the heart of the Cheltenham Transport Plan (CTP), the borough council’s vision for a better town centre.

For more information about the transport plan, visit www.cheltenham.gov.uk/transport-plan