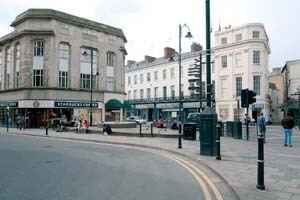 If agreed, it would mean that the road would re-open to through traffic.

At the same meeting, the County’s Cabinet is also considering their response to the climate emergency with a report that commits to reduce Gloucestershire’s carbon emissions by 80% by 2030 when compared to 2005, and implement effective climate change impact assessments into the council’s decision-making processes.

Councillor Andrew McKinlay, Cheltenham Borough Council’s cabinet member for development and safety said: ‘”The trial scheme, having lasted for 18 months, has provided significant evidence to support the continued closure of Boots Corner that we see as being integral to our plan to put people before traffic and sustain the vitality of our High Street.

‘’We have seen a marked increase in pedestrian and cyclist movements, no adverse air quality impact, a significant increase in bus travel and a decline in overall traffic. It has also been noted that our high street has continued to attract investment with the arrival of some big brands and has less empty retail units than lots of other town centres, showing that it continues to punch above its weight.

“I feel strongly that the trial closure had led to the most significant modal shift success ever achieved within the county with a significant reduction in carbon emissions. ‘’

Councillor McKinlay went on to say: ‘’We do not want to put these gains in jeopardy and potentially reverse this modal shift and so undermine the county council’s own stated ambition to collectively reduce Gloucestershire’s carbon emissions by 80% by 2030.

“In addition, the borough council commissioned an independent resident satisfaction survey and this revealed that walking, cycling and public transport ranked as a top 3 priority for residents, so the trial closure clearly chimes with local sentiment.’’

“I am therefore asking the county council’s cabinet to reconsider the evidence that we have submitted before making their decision.”

Evidence gathered throughout the duration of the 18 month trial includes:

The final decision will be taken when the county council’s cabinet meet at 10am on Friday 20 December 2019.