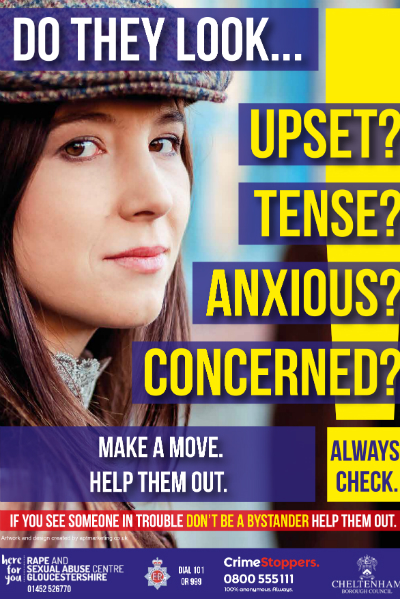 An awareness campaign is returning to Cheltenham, which aims to inform everyone of the different types of sexual harassment and violence people face and where help is available.

Cheltenham residents and visitors will soon see a variety of awareness posters and adverts which highlight the different types of sexual harassment and violence people face and where help is available.

Launched to coincide with Cheltenham festival race week the campaign aims to ensure that everyone is aware that any unwanted sexual contact or harassment like up-skirting, grabbing, groping, rubbing and pinching are sexual violence crimes.

The council, with its partners Gloucestershire Rape and Sexual Abuse Centre (GRASAC), Crimestoppers and Gloucestershire Constabulary, want to ensure that victims and witnesses to this behaviour know where they can report these crimes and that they will be supported and listened to.

Cllr Flo Clucas, cabinet member for healthy lifestyles, said: “Cheltenham becomes a hub of activity during race week and we want people to enjoy themselves and feel safe.

“Our Purple Flag status recognises the town’s vibrant diverse economy and also the importance of the wellbeing and safety of our visitors and residents. This campaign aims to reinforce the stark but simple message that only yes means yes and if anyone feels concerned or uncomfortable with something they’ve witnessed or experienced then we would like them to report it.”

Maggie Stewart, GRASAC director, said: “We are more than happy to be involved in this campaign again as we have information from our clients that sexual assault is prevalent during race week and GRASAC hopes that preventative measures will alleviate problems occurring in Cheltenham both during the day and through the evenings.”

Superintendent Paul Dutton from Gloucestershire Constabulary said: “We have been working closely with Cheltenham Racecourse and Cheltenham Borough Council to ensure local residents and racegoers are kept safe during Festival week, however GRASAC has raised concerns that they believe some offences, particularly during the night time economy, might go unreported.

“We want to reiterate that sexual violence will not be tolerated in Gloucestershire.

“It is always the perpetrator’s choice to offend. Abuse in relationships and sexual violence are not normal or acceptable. Anyone who is concerned can approach any of our officers who will be on patrol both at the Racecourse and the wider town centre.

“We also have specially trained officers to investigate sexual violence and support victims. Call any offences straight away on 999. All reports will be dealt with in confidence.”

Notes:
For any organisation who wish to display the posters or request information cards please contact: Jen Tucker on 01242 264277, email Jennifer.tucker@cheltenham.gov.uk

Cheltenham is proud to have retained its Purple Flag status , which recognises the town as having a vibrant and diverse mix of night-time entertainment, leisure and cultural offers, while promoting the safety and wellbeing of visitors and local residents.

www.survivorpathway.org.uk is also an online resource for anyone wanting to know more about specialist sexual violence support services in the South West.