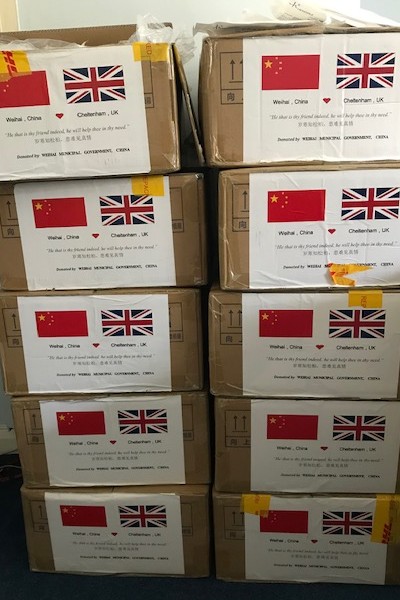 Thousands of personal protective equipment (PPE) has been donated to the council from Cheltenham’s twin town Weihai, China to support the effort in Cheltenham and around the county.

A letter has been received by Cheltenham Mayor Cllr Roger Whyborn from Mayor of Weihai municipal government Yan Jianbo, who has organised a consignment of over 10,000 disposable protective face masks for the council to use and share among key workers.

Cllr Roger Whyborn said: ‘’We have a special friendship with Weihai and we are very grateful to the Mayor of Weihai Yan Jianbo and the city of Weihai for their support. This very kind PPE donation allows us to pass on vital safety equipment to those most in need to ensure our services can continue to get the support they need.’’

Cllr Diggory Seacome as Chairman of the Twinning Association continued: ‘’Help from one of our twin towns goes to show how strong the Twinning ethic is, and we are most grateful to Weihai for their generous gesture.’’

The donations will be shared with and distributed by the Local Resilience Forum to key workers within the borough and county.

Weihai is a city in eastern Shandong province, China and was twinned with Cheltenham in 1987. Further information about Cheltenham Twinning can be found at www.cheltenham.gov.uk/twinning.