Drop litter and pick up a fine 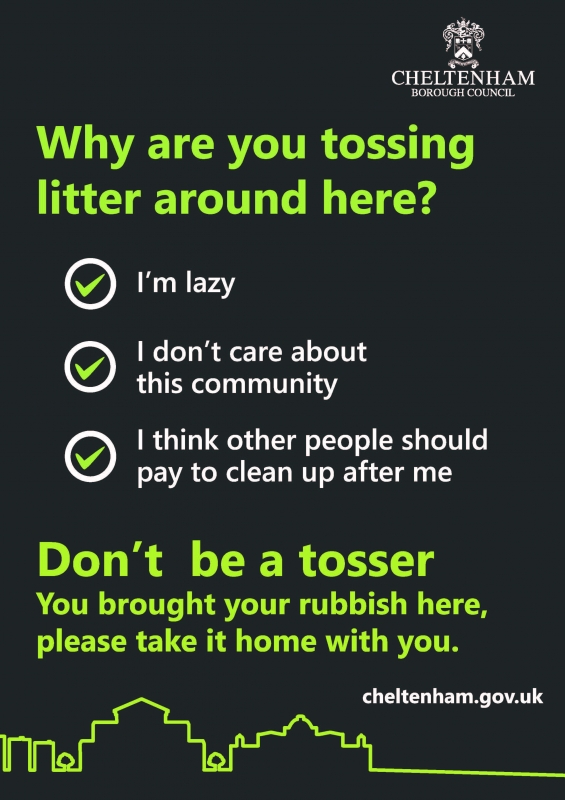 A Cheltenham man has been prosecuted in Cheltenham Magistrates Court for littering and fined a total of £417 after being seen dropping the remains of a cigarette on the ground.

The man, age 30, from the Bath Road area of Cheltenham, was witnessed by a council community protection officer dropping the cigarette end near the EE shop on the high street before returning to his place of work.

The fixed penalty notice carries a penalty of £80 that is reduced to £50 if early payment is made. Failure to pay the penalty charge notice left the council with little option but to refer the matter for legal proceedings.

Failure to attend court led to a £220 fine in his absence, with costs of £165 and a victim surcharge of £32, totalling £417. The maximum penalty that the courts can issue is a fine of £2,500. A person convicted of littering will also receive a criminal record.

In response to an increase in litter in public spaces around the borough, post lockdown, the council launched its ‘Don’t be a tosser’ anti-litter campaign, along with posters to highlight the issue.

Cllr Andrew McKinlay, cabinet member for development and safety, said: “The council will not tolerate littering in the town and action will be taken against those who flaunt the law.

“We believe that this prosecution, along with our new ‘Don’t be a tosser’ campaign, will show the minority who litter that we will do everything in our power to stop this careless behaviour.”

Callum Head, town centre coordinator, says: “Our ‘Don’t be a tosser’ campaign has been immensely popular and continues to be rolled out all across the borough following high demand from residents. It’s great to see communities and businesses alike backing our fight to challenge the few who think it’s up to someone else to pick up after them.”

New penalty notice charges came into force from 1 April 2020 with the penalty increasing from £80 to £150 and with an early payment of £90. Anyone seen dropping any form of litter can face being issued with a FPN.

Notes: As the case was presented to the Single Justice Procedure court in Portsmouth, and later adjourned to Cheltenham Magistrates Court, the council is unable to provide the person’s name.

Normally cases are heard in public and additional information - such as a name - can be given at a magistrate’s court as it is already in the public domain, however the Single Justice procedure is different.