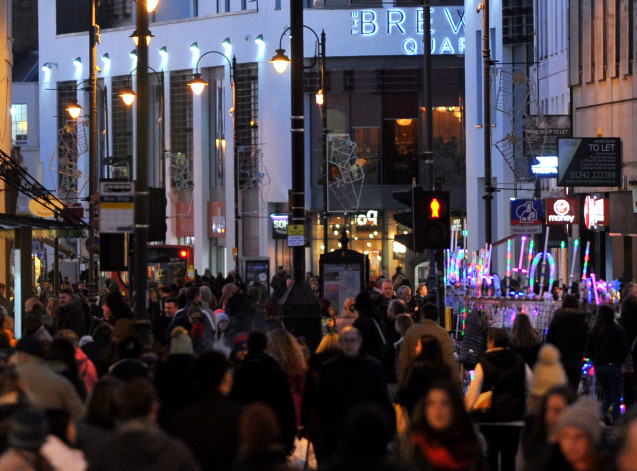 The council has published the headline results of a survey it undertook to understand how safe women feel in the evening and at night in the town centre.

As bars, clubs, restaurants, theatres and festivals reopen after the pandemic, it is really important that everyone who uses and enjoys Cheltenham's vibrant night-life feels safe.

So whilst we know that the vast majority of people who use our town centre in the evening and at night do so safely, which is recognised by our Purple Flag accreditation, there is a concern that women and girls may face a greater risk of harm.

Although extensive work has already been undertaken, including awareness raising projects and implementing the Ask for Angela scheme. the national focus on the safety of women at night has strengthened the council’s determination to work with a range of partners including Gloucestershire Constabulary, University of Gloucestershire, Gloucestershire Rape and Sexual Abuse Centre (GRASAC) and Cheltenham Safe to understand the scale of the problem in Cheltenham and to take action where needed.

Cllr Flo Clucas, cabinet member for safety and communities said: “As bars, clubs, restaurants, theatres and festivals reopen it’s really important that everyone who uses and enjoys Cheltenham's vibrant night-life feels safe. I welcome the results of the survey, which although quite troubling, have given the council and its partners added impetus to our collective work.

‘’Respondents told us that all parts of the night-time economy need to take the issue of sexual violence seriously. Women in particular are telling us that they do not want to be blamed or asked to change their behaviours, instead they want to see a culture created where sexual harassment is unacceptable which would also see men being educated about the consequences of inappropriate behaviour.

‘’Our work is timely given the national interest in the safety of women at night following Sarah Everard’s horrific murder, the conviction of Wayne Couzens and the fact that least 81 other UK women have been killed in circumstances where the suspect is a man since her murder. That is 81 women in 28 weeks.

‘’I am taking a report to council on 18 October where I hope members will join me in agreeing how important it is for the council to demonstrate leadership on this issue and continue to work with its partners to make women feel safer at night.

“Some of the commitments I will be asking my colleagues to commit to include developing a pledge for women’s safety, incorporate the pledge within our licensing policy and developing a communications plan to create a culture where sexual harassment is unacceptable.”

At the full council meeting, members will discuss the Safety of Women at Night report, which outlines a range of programmes, activities and training to help increase women’s safety in Cheltenham.

Dr Louise Livesey senior lecturer in criminology from the University of Gloucestershire said: ‘’Women and girls feeling unsafe at night is a national issue – the survey results show us that Cheltenham is not immune to these issues. The right to feel safe as you go about your everyday lives, working, socialising, travelling, just living, is something we should be able to take for granted. But we can’t and for many women it is effectively an unofficial curfew which curtails their rights and freedoms. When safety for women and girls increases it is a good marker that the safety of every has improved, there is literally no downside to working to improve the safety of women and girls, and we all know by now that we can all play an active part in it.”

DS Steve Bean from Gloucestershire Constabulary said: “The results of the Cheltenham Borough Council survey are extremely informative and high-light some very real safety concerns amongst women and girls within the town’s night-time economy. The survey shows that not only is there a wide spectrum of inappropriate, unwanted and often criminal behaviour being perpetrated, there is also a correspondingly wide, and in some cases concerning, spectrum of responses and attitudes to that behaviour. The county has had an effective Sexual Violence partnership for several years, involving a range of participating agencies from the public, private and voluntary sectors, however, it is clear that there is still much work to do. Much of the behaviour described appears to stem from deep-seated societal issues, stereotyping and cultural attitudes towards women and girls, and there is a collective responsibility on all of us to work together to address these.”

Maggie Stewart from Gloucestershire Rape and Sexual Abuse Centre added: ‘’Gloucestershire Rape and Sexual Abuse Centre is pleased to be working with Cheltenham Borough Council colleagues to develop a programme of support to enable women to feel safe in Cheltenham. The response to the survey was staggering and it is clear there is much work to be completed with our partners.  As more than 70% of respondents have told us they do not feel safe at night or during race weeks, we must act on the information that has been provided to us. I hope that Cheltenham Borough Council and partners’ bid to the Home Office for funding to tackle the challenges raised is successful and we can work together to make the town a safe place for women and girls.’’

Anyone wanting to disclose a crime that has not already been reported, please report to Gloucestershire Police either by calling 101 or online https://www.gloucestershire.police.uk/ro/report/ocr/af/how-to-report-a-crime/

For support and advice, please act the following agencies: