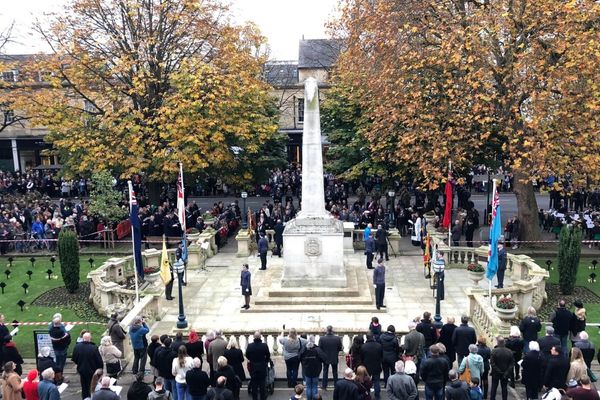 Cheltenham will reflect, respect and remember all those people who gave their lives for our freedom

On Armistice Day (Friday 11 November) the council is supporting The Royal British Legion by encouraging businesses, shops, offices and individuals to pause to remember at 11am.

On Sunday 13 November, the war memorial in Cheltenham’s Long Gardens on the Promenade will once again be the centrepiece for the town’s service of remembrance and civic parade. The service will begin at 10.50am and a lone trumpeter will play ‘The last post’ before two minutes of silence at 11am, honoured by Cheltenham’s Mayor, Cllr Sandra Holliday.

After the Reveille, the service continues with prayers, hymns and the national anthem, played by Cheltenham Silver Band supported by the Cheltenham Choral Society.

The mayor will lay the first wreath at the war memorial followed by other civic dignitaries, including borough and county councillors, and representatives from local organisations. After the wreaths have been laid, there will be a parade and march past that the civic party will watch from the dais in front of the Municipal Offices. Cllr Holliday invites any ex-service personnel who would like to take part in the parade to form up at 10.35am in front of the shops and bus stops on the Promenade.

Wing Commander Roy Roberts, chair of the Cheltenham branch of the Royal British Legion, said: “As custodians of Remembrance, the local Royal British Legion branch is honoured once again to join with the mayor and the town's citizens and voluntary organisations to reflect on the sacrifices of those who have gone before us and to think of those who are keeping us safe in today's challenging times.

“I never cease to be amazed at the turn outs on Armistice Day and Remembrance Sunday by young and old; it’s clearly still important to very many, both nationally and locally."

Cllr Sandra Holliday, Cheltenham’s mayor, added: “It is a privilege to be able to lead the town in this act of remembrance. I would like to invite any ex-service personnel who would like to attend the services to assemble with our group at 10.50am in front of the Municipal Offices, along with members of the community.”

The event will be live streaming on the Cheltenham Borough Council YouTube channel.

Download the order of service for the Remembrance Sunday service