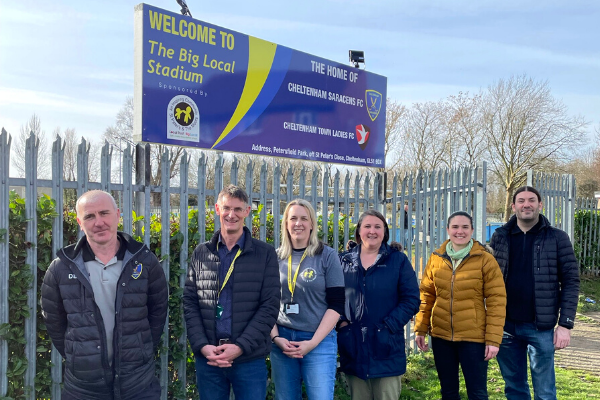 Lease secures club’s future, so improvements to sport and community facilities can go ahead.

A positive future for Cheltenham Saracens Football Club has been secured after Cheltenham Borough Council granted a new 25 year lease to the popular club.  It means that the club can continue to occupy, improve and grow its facilities at the Big Local Stadium, Petersfield Park.

The popular local club has had a lease at Petersfield Park since 2003. During this time, the club has carried out improvements to provide a better environment for its membership. There are further works to be carried out which would require substantial funding (from sources other than the council). To be eligible to receive this funding, and subsequently be in a financial position to secure enough to regenerate and improve the facilities, the club need to be able to demonstrate the longevity of their proposals and occupation.

At a cabinet meeting at the end of last year, members agreed to offer a new 25 year lease, and approved their improvement proposals.

Cllr Peter Jeffries, cabinet member for finance and assets, said: “The club’s membership and profile has really grown over the years and this in turn has increased the use of their facilities, which of course need to be maintained and improved to be fit for the future. The club is a huge asset to the local community and what’s particularly exciting about their future plans is a possible collaborative project between the club, Big Local and St Peter’s and the Moors. The club continues to demonstrate its commitment both to St Peter’s recreation ground and to the wider community and I am really pleased that they have a great future ahead of them.’’

Graham Roberts, chair of Cheltenham Saracens FC added: “We are really pleased to have signed the new lease, it secures the club's future and means we can continue with our plans to improve the ground and facilities. With the plans we have the ground can become a big part of the community with some of the best facilities around.”

Photo attached for single use only. Left to right:

Cheltenham Saracens Football Club is a football club based in Cheltenham. Affiliated to the Gloucestershire County FA, they run teams at all ages and their 1st team currently play in the Hellenic League Division 1 West, development team in the Hellenic Div 2 and U18s in the midweek floodlit league, as well as 3rds at the Cheltenham League.

The friendly community club is run completely by volunteers.