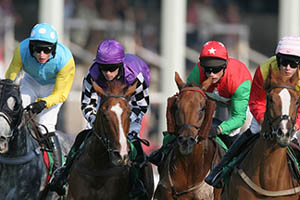 With record numbers of visitors to the 2022 Cheltenham Festival and an average 65,000 people attending on each of the four days, officers worked closely with partners to ensure everyone's safety.

Council officers worked closely with key stakeholders and agencies in the run up to and during the festival, to ensure that everyone was kept as safe as possible.

The festival saw the return of spectators and visitors for the first time since 2020, with tickets selling out on all four days, and a boost of £100m to the local economy.

Cllr Martin Horwood, cabinet member for customer and regulatory services, said: “The festival is a hugely important event for Cheltenham, bringing in thousands of visitors with many positives to the town and its economy.

‘’But it’s also a big challenge to manage with our partners, to ensure people visiting do so knowing that they will have a safe and enjoyable stay.

“We’ve again worked closely with the police and the racecourse on a number of safety measures. We have put on additional patrols of our licensed premises and taxi ranks to make sure they’re operating safely and lawfully, and we’ve brought in extra toilet facilities around the town and on the route up to the racecourse, supplementing the public toilets available.

“I want to thank Cheltenham Borough Council officers and our partners for all the extra efforts they’ve made during race week. It really does make a difference.”

Other measures in place during race week included: