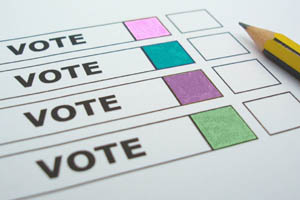 Voters go to the polls next week (Thursday 5 May) to elect councillors to represent them and help provide important local services.

All those eligible to vote, can vote in elections to elect councillors to Cheltenham Borough Council.

Polling stations are open from 7am to 10pm, although some people may have cast their votes by post already.

At polling stations, some safety measures are being kept to ensure safety and cleanliness, and protect voters and election staff; pencils will be provided and voters can also bring their own.
Everyone entering a polling station is asked to consider wearing a face covering and only vote at the polling station if they are feeling well.

Cheltenham’s returning officer, Paul Jones, said: “I hope our residents will exercise their democratic right to vote to have their say in our borough elections.

“I’d like to ask everyone to check the information on their poll card, as their polling station might have changed since the last election. Poll cards are not needed to vote, but it would be useful to bring them along to make the process quicker and more efficient.

“Everyone should feel reassured that we have kept sensible steps in place to ensure safety and cleanliness at our polling stations. Residents are invited to come along with their own pencils to mark the ballot papers if they wish and to consider wearing a face covering.’’

Counting of ballots and announcement of results will take place on Friday 6 May when full declaration of results for the borough elections will be made.
Results from the Cheltenham count will be posted at www.cheltenham.gov.uk/election-results on 6 May 2022, and also live from the council’s Twitter account @CheltenhamBC.

Cheltenham Borough Council is made up of 40 councillors, 21 seats are up for election as there is currently one vacancy in College Ward due to the resignation of William Guy Maughling (Lib Dem) in March 2022.

The current political makeup of the borough council is: 29 Liberal Democrats, 7 Conservatives, 2 People Against Bureaucracy and one non-aligned.
The Liberal Democrat group therefore has an overall majority of 19.