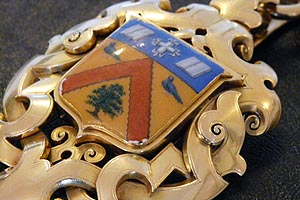 The annual inauguration of the mayor was held at Cheltenham Town Hall at 6.30 pm yesterday (16 May).

The mayor chairs the council and represents the borough at many local business and charity events throughout the year. This year, the new mayor has decided to focus her fundraising efforts towards the Cheltenham and Gloucester Hospitals charity.

‘’My eldest grandchild was diagnosed at the age of 2 and there seems to be a gap which has been identified by him and the family, that hopefully we could help fill with some additional resources in order to help other families.

‘’My second charity will be confirmed at a later date.’’

Cllr Steve Harvey, out-going mayor, says: “My chosen charity, The Friends of Cheltenham Samaritans raised £18000 which after two years of Covid is much needed revenue. I had the honour to sit on the Medal of Honour Committee and whole heartedly endorse new recipient Les Bonney, an outstanding contribution over many years. We have a Borough of unsung heroes and I would invite everyone to consider who to choose for new year. So, let me start that now with Rosie-May Alcock aged 8. Rosie sang and danced for exiting racegoers near her house and raised an amazing £1700 for the children of Ukraine. I was very pleased to present her with a special certificate at Mayor making.’’

The Medal of Honour recipient for 2022 is Leslie Bonney, a local resident who has worked tirelessly for St Vincent’s and St George’s for over 20 years.

For further details about the awards contact Jennie Ingram, personal assistant to the mayor on 01242 264108 or jennie.ingram@cheltenham.gov.uk