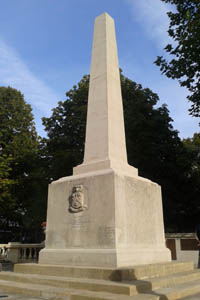 On the 40th anniversary of the Falklands War, we will remember all those impacted by the conflict at a commemoration service at 10.50am on Tuesday 14 June, at the War Memorial, Promenade.

On Tuesday 14 June the 40th anniversary of the end of the Falklands conflict will be marked with a commemoration service at Cheltenham’s War Memorial.

Cllr Holliday said: "I’d encourage our Falklands veterans and members of the public to come along to the commemoration. It is a chance to support and recognise our forces and all who were involved in the Falklands War. We will remember and show our respect for service men and women who gave their lives during the conflict."

The Royal British Legion and military standards will be paraded and wreaths laid to honour the sacrifices of 255 British and Hong Kong personnel who lost their lives and the 777 injured at the time.

During the short service, a serving soldier will read a brief reflection of the conflict.

Chairman of Cheltenham Royal British Legion branch - Wing Commander (retd) Roy Roberts said: ‘’The Royal British Legion is at the heart of a national network that supports our Armed Forces community. Our branch is proud to be working with the council on Cheltenham’s commemorative service to mark the 40th anniversary of the Falklands War and all the British service personnel and civilians involved, particularly those who paid the ultimate sacrifice.’’

Cheltenham Borough Council’s Armed Forces Covenant champion, Cllr Steve Harvey said: “Having been on four operational tours to the Falklands and been on exercise with RN Falklands Veterans, my thoughts are with all who served and their families. This is a time to reflect and remember those that didn’t make it home and those that did but still carry the mental scars.’’

To find out more about The Royal British Legion’s national commemoration and the livestream for those unable to attend please visit www.britishlegion.org.uk.