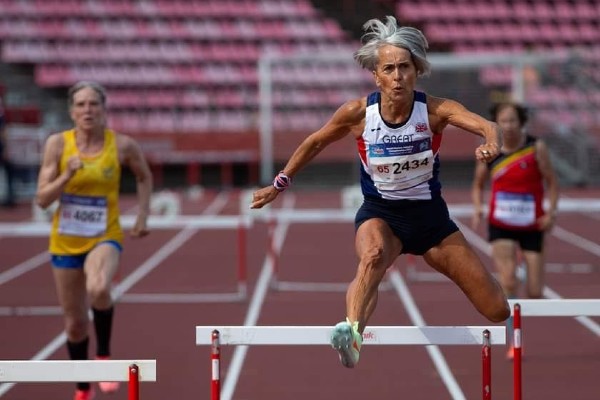 Cheltenham and County Harrier, Jane Horder, has won gold yet again in the women’s over 65s 300m hurdles with a new world record of 52.33.

The win, at the World Masters Championships in Finland earlier this month, brings her total world championship medal tally up to 13 golds.

Already this year, Jane smashed the world record for female over 65s, in the 80m hurdles with a new time of 13.57 seconds, which she won at the Brewer Memorial Games in May, held at our very own Prince of Wales Stadium.
The previous world female over 65s record, set in 2008, was 14.03 seconds.

The Cheltenham and County Harriers train at the Prince of Wales Stadium and aim to help athletes of all abilities to enjoy the sport and achieve their own personal targets.

Cllr Flo Clucas, cabinet member for safety and communities for Cheltenham Borough Council, said: “In a sprint event like the hurdles, to take over half a second off a world record is an amazing achievement. I’m delighted that our Prince of Wales Stadium continues to offer Cheltenham and County Harriers such an inspiring venue that can help athletes of all ages achieve amazing feats.”

Crispian Webb, Cheltenham Harriers vice-chair, said: “Jane has been a member of the Harriers for many years and her hard work and dedication to the sport continues to inspire all our athletes. Jane even acted as our senior team manager for many years offering advice and encouraging athletes, truly leading by example.”

Jane Horder, Cheltenham and County Harrier, said “I’m delighted to have won the world championship w65 300 hurdles and my 80 hurdles titles. I would very much like to break both records further but it is gold medals that are most important at any championship event.”