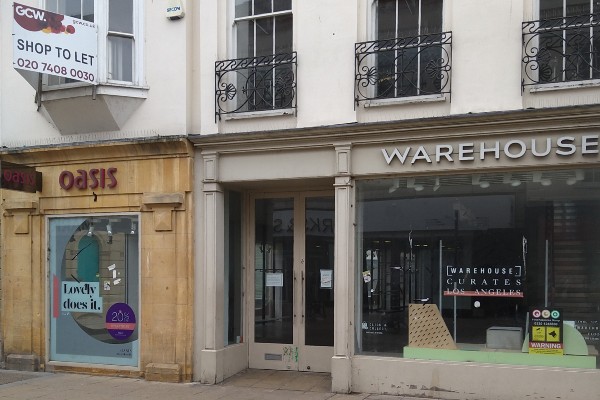 Landlords of empty shops in Cheltenham are being told to do more in an effort to boost the high street by filling their vacant premises.

The borough council and Cheltenham BID are pursuing a two-pronged strategy, with engagement and enforcement on the agenda.

A respected industry expert has been brought in to work with agents and property owners, while the council has ramped up its existing commitments and issued warning letters to those responsible, to request that they review and improve the condition of their properties.

To date, 32 properties have been assessed as in need of improvement. The former Sports Direct unit (102-104 Cheltenham High Street) is a live example of active engagement with the property owner and agent.

A recent Cheltenham BID survey found that there are 43 unoccupied ground floor retail units in the BID zone which represents 8.85% of the total of 486. Springboard’s July vacancy report showed that Cheltenham’s vacancy rate was 8.8% against the national figure of 11.2% and the South West average of 9.4%.

With new openings planned for the autumn, Cheltenham’s vacancy figure is set to improve.

Footfall is a good indicator of the strength of the high street and again this shows Cheltenham High Street is resilient to the current economic conditions; despite the impacts of the pandemic and the recent cost of living crisis, businesses have responded positively.  The peak was early in July and ties in with the dates of the music festival, Wimbledon Big Screen, and launch of the Umbrella project.

Cllr Max Wilkinson, cabinet member for economic development, culture, tourism and wellbeing, said: “Many people are concerned about the high street and we are too – particularly empty and unsightly shop fronts.  Despite the well-known challenges faced by every town and city centre, Cheltenham is faring relatively well.

“However, we will not be complacent and we know there is work to do. Many of the landlords of shops in Cheltenham are investment firms and they can be challenging to deal with. That’s why we are pursuing a two-pronged approach of stepping up discussions with agents and landlords of empty premises, while taking enforcement action when it is needed – as evidenced by the 32 letters already sent.”

The council and Cheltenham BID have commissioned The Vacant Shops Academy to audit existing units in Cambray Place, The Strand, High Street including the lower High Street, Promenade, Montpellier and the Regent Arcade to help develop a plan to fill them.

The delivery of this plan, in addition to the recently renovated Clarence Fountain pocket park and the Wilson Art Gallery and Museum refurbishment, continues the council’s work to create a vibrant town centre for residents and visitors.

Councils cannot set business rates or dictate rent levels in shops owned by private landlords.  Many of the empty premises in Cheltenham are owned by investment or pension companies and a number of these are offshore. The programme of activity is expected to last one year and includes a review of business engagement alongside formal enforcement action by the council against landlords who do not ensure their premises are well-maintained.

Heath Gunter, Cheltenham BID chief executive, said: “The traditional high street is changing and through working with The Vacant Shops Academy we can ensure that Cheltenham is at the forefront of this evolution. It is an important piece of work that needs to be done and it is great that Cheltenham BID can partner with Cheltenham Borough Council on this project.”

This follows previous work by the council and BID, which involved contacting the landlords and agents of long-term empty premises in 2019. The response rate was low.

The full improvement plan will be by the council’s cabinet later in the year.

Data is being compiled to assess the vacant units in the streets identified by the Vacant Shops Academy project.

Enforcement action - A section of the planning act (Chapter II, Section 215) gives Local Planning Authorities (LPAs) the power to require ‘proper maintenance of land’. In effect this allows LPAs to take enforcement action where ‘it appears that the amenity of a part of their area, or of an adjoining area, is adversely affected by the condition of the land in their area’. Where they consider it does adversely affect the area they may serve a notice on the owner and occupier of land under this section of the act. Such a notice can then set out the steps required to remedy the condition of the land

Empty units - A recent Cheltenham BID survey found that there are 43 unoccupied ground floor retail units in the BID which represents 8.85% of the total of 486 units.

In Springboard’s April report (from figures gathered to the end of March) the BID area’s vacancy rate was 9.4% against the national figure of 11.2% and the South West average of 10.4%.  The period before that, Cheltenham’s vacancy rate was 11.4%.