Join us for a free screening of the film 2040 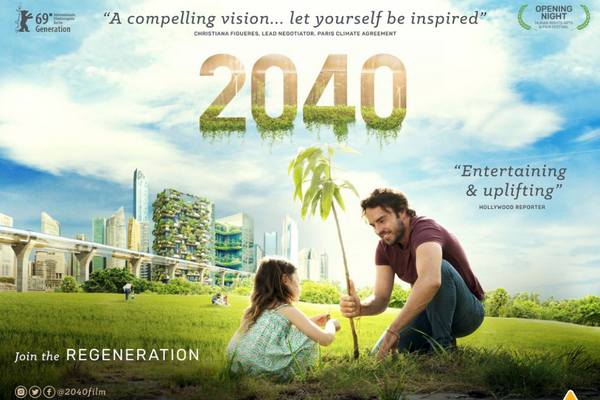 A powerful film about the climate crisis conversation will be screened locally thanks to CK Futures, in partnership with Cheltenham Borough Council.

The free screening of the film 2040 by Damon Gameau, which brings new hope to the climate crisis conversation, will take place on 30 September at Stanton Hall, Charlton Kings, doors open at 7pm for a 7:30pm start.

Motivated by his four year-old daughter and concern for the planet she will inherit, Damon Gameau, Australian award-winning director (That Sugar Film, 2015) and actor, embarks on a global journey to meet innovators and change makers to discover what the future of the planet could look like by the year 2040 if we embraced the best solutions already available to us, and shifted them rapidly into the mainstream.

The feature length film runs for 90 minutes and will be followed by a discussion for those who want to remain and reflect on what they have seen and heard. This screening marks the first of a number of free showings around Cheltenham over the next 12 months.

Damon Gameau says, “I am looking forward to sharing 2040 with UK audiences, at such a crucial and pivotal moment in the global climate crisis. I believe there is room for a new story, a story that focuses on the solutions; 2040 is a letter to my 4-year-old daughter showing her an alternative future to the doom and gloom version we are currently presented with.

“But there is a catch. This is not an exercise in bad parenting - everything I show her in 2040 must already exist today in some form. It cannot be made up. This film is not a utopian fantasy; it is an exercise in what I call ‘fact-based dreaming’. It is the narrative the next generation needs to see, to aspire to, and to believe is possible.”

Mike Redman director of climate change, says: “We hope that residents will enjoy this acclaimed, thought-provoking film with its wider solutions to the climate crisis.’’

You can find some helpful tips on discussing the climate crisis here on the council’s website (www.cheltenham.gov.uk/climate) and also here: www.whatsyour2040.com/towards-2040/talking-about-climate-change/.

Register on Eventbrite to guarantee your place: https://2040-Film-Screening-CK.eventbrite.co.uk.

Guided by the voices of 100 child interviewees aged between 6 and 11 who describe the kind of world they would like to see by the year 2040, Damon draws on the best minds from around the world to focus on climate, economics, technology, civil society, education, agriculture and sustainability to conjure a positive portrait of what ‘could be’ instead of the current dystopian future we are so often presented with.

Aimed at a broad audience including children and their families, Gameau blends traditional documentary with dramatised sequences and high-end visual effects to show how these solutions - including seaweed farming, empowering girls and women with education, automated vehicles and decentralised, renewable energy systems - could regenerate the world for future generations.

Alongside the release of 2040 a long-term impact action campaign, The Regeneration, aims to galvanise audiences to learn about, contribute to, advocate for and invest in regenerative solutions to improve our planet. In Australia, where the film and campaign were launched in April 2019, The Regeneration is reporting huge successes, including raising over Aus $475,000 to launch Australia’s first regenerative seaweed farm and inspiring hundreds of people to volunteer with action partners like Climate Foundation.

An impact update from the Australian campaign can be viewed here:

2040 is being released by Together Films in the UK & Ireland, and has already screened to over 12,000 children across the country as well as an extensive theatrical release. The 2040 Community Regeneration Tour includes hundreds of schools, universities, businesses and local government nationally screening the film, including in depth conversations about the way we can collectively implement solutions to reduce the climate crisis.

We hope you will be able to feature our screening, and the wider solutions to the climate crisis, in your publication. You can find some helpful tips on discussing the climate crisis here: www.whatsyour2040.com/towards-2040/talking-about-climate-change/

Find out more information about 2040: The Regeneration here: www.whatsyour2040.com

For more information about this community screening please contact: