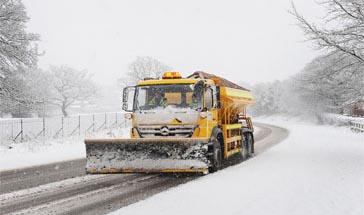 UK clothes retailer Next has said the December snow cost it £22m in Christmas sales, although profits remain on target.

They report that online sales were initially boosted from stranded Christmas shoppers staying in the warm at home, but then slumped amid fears the snow would delay deliveries.

Next store sales for the five months up to Christmas Eve were down 3.1% compared with last year, the firm told the BBC . In direct contrast, online sales were up 8.7%, indicating the growth in UK online retailing and the decline of the traditional high street.

In Cheltenham , the build-up to Christmas proved to be very demanding, with heavier than forecast snow leading to a whitewash of the town centre.

One local trader, who is based in the Lower High Street, described the Christmas period as "simply awful".

They said: "Our figures were well down on Christmas 2009. Staff couldn't get in because of the terrible state of the roads, there being no buses and so on, and customers reported similar problems - it was like being in isolation.

"The result was December was a bad month for me, and sales were dire".

Jon Leamon, deputy chief executive of the Cheltenham Chamber of Commerce said: "Our members - and not just retailers - have been telling us that the recent severe weather has had major impacts upon their businesses.

"For example, the Hotel du Vin experienced over 50 cancellations from customers over a four day period. This is added to the fact that many members of staff found it impossible to get into work. This and similar businesses will continue to suffer in January.

"The Indian restaurant B10 Balti, in Suffolk Road , also suffered heavily during the Christmas week. At one night, over 80 people cancelled because of the snow - this had a massive impact upon the business, as they had extra food ordered in especially".

Martin Quantock, Cheltenham 's town centre manager, said that footfall during the autumn months had been outperforming the UK average. He said: "The timing of the snow was extremely detrimental to retail sales, as it was across the country, especially given our recent footfall figures.

"However, the picture is now looking a lot better. Since Christmas, the High Street has been very busy, so some of the businesses have been able to claw back some of losses incurred in the build up to Christmas. In a welcome addition, local retail areas such as Bath Road have benefited from people not going to the town centre, and instead shopped locally.

"The impact of the snowfall did hit us hard, but we are now bouncing back, and I am confident that shoppers will return for the festivities in 2011".