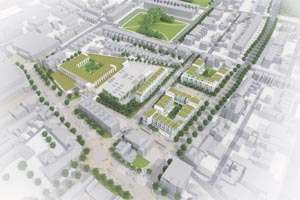 Local residents can have their say as the proposed design for North Place and Portland Street car parks is unveiled.

The scheme which made it through a selection process is by developer, Augur Buchler and includes a hotel, food store, a public square, homes and affordable housing.  The design has gone online today and will go on public display from next week for residents to have their say.

The Cheltenham Development Taskforce – which brings together private, public and voluntary sectors – has been driving forward ambitious plans for the regeneration of the borough including these two town centre car parks.  The taskforce, working with Cheltenham Borough Council, invited development companies to come up with ideas that would enhance the area.

The following shows Augur Buchler’s proposals against the minimum requirement set out in the development brief approved by the council:

Land uses
The council’s development brief allows for a wide range of possible uses, including retail, commercial, housing and leisure.  The Augur Buchler scheme proposes a mix of food store, hotel and housing.

Car Parking
The council’s brief requires a minimum of 300 public car parking spaces.  The Augur Buchler scheme provides for 609 spaces for the general public, food store and hotel. Additional parking provision will be made for housing.

The council’s brief also says that the scheme must be delivered in a way which reflects the quality of the town’s history and creates an attractive place where people can feel safe. It is an approach which was supported by the public during a consultation on the brief in 2010.

The Augur Buchler was the top-rated scheme of the four that were short-listed earlier in the year.  The schemes were rated by an assessment panel using a scoring system which took into account a number of different issues, including environmental benefits, design quality, contribution to the local economy and financial return to the council.

Councillor John Rawson, cabinet member for built environment said:  “We have had high ambitions for this redevelopment project right from the start.  We want it to be a high quality scheme which improves the town centre and which future generations of Cheltonians can be proud of.  That is why the response of local people to the plans, and their comments on how the scheme can be improved, are so important to us.

“At the same time, the scheme needs to be practical and deliver a good financial return to the council, so that the proceeds from this development can fund improvements elsewhere in the town.  We will be taking independent advice from one of the country’s top property valuers to ensure that we get the proper return on our asset.

Jeremy Williamson, managing director of the Cheltenham Development Taskforce added:  ''I am pleased with the quality and strength of the scheme put forward by Augur Buchler.  The next couple of weeks are important as they will provide an opportunity for members of the public to propose ways to improve the scheme, given that it already meets the requirements that we were seeking. This feedback will then help to shape the final proposal which will go to full council for approval.'’

John Henley, development director for Augur Buchler said: “The whole team is delighted to be in the final stages of a most exciting competition which has produced a very well researched development proposal that not only regenerates a major missing link in the northern area of Cheltenham, but acts as a further catalyst to improvements within Cheltenham as a whole.  We are delighted to have Skanska on our team, bringing with them their credentials as the UK’s greenest company. Through intelligent design from all the professionals we have produced the optimum ratio of economic benefit and good townscape to produce a scheme which we can all be proud of in years to come.”

From today, the plans are available on-line and they will also be on show at key locations* around the borough from 23 August. In addition, representatives from the council and Augur Buchler will be on hand to talk to residents at a town centre display, on the High Street, from 3 September until 10 September.   Members of the public can say how they think the scheme could be improved.  The comments will then be given to the developer to help them finalise their proposals before a final decision on the specifics of the scheme is made by the council.

Drawings are available on request

A static display showing the design will be available at the following locations from midday on 23 August during each venue’s usual opening hours: