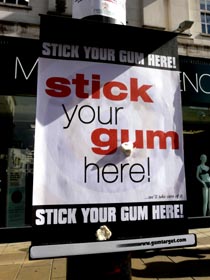 The scheme encourages gum chewers to put their gum on a special disposal board called a GumTarget, instead of dropping it on the ground.   Initially there will be two GumTargets located on the fingerpost signs, one outside Marks & Spencer and the other outside Primark.  The GumTargets have removable sheets that are regularly changed.  At first the sheets will say ‘Stick your gum here’, but the boards can sport a choice of celebrity faces or fun slogans to encourage the public to stick their gum to them.

John Marcer, environmental maintenance officer, said: ‘Removing gum is labour intensive as our routine street cleaning doesn't get rid of it and we have to use specialist jet washing equipment, which can also damage paving stones.  This can cost up to £14,000 per year.   We hope people will work with us on this to produce a cleaner town centre’’.

Councillor Roger Whyborn, cabinet member for sustainability, said: “Discarded chewing gum makes our streets unsightly and hazardous.  Anything which stops people dropping gum on the streets will be welcomed and I look forward to reviewing the results of this trial.”

The scheme has been successfully launched in other parts of the country with tangible results.

The GumTarget initiative was developed by award winning company Meteora Limited, which focuses on litter prevention and awareness.

Photo opportunity - Thursday 22 September at 11 am outside M&S