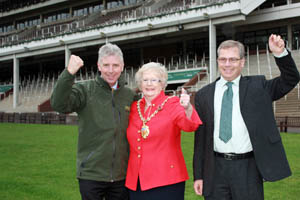 We are delighted to announce that Cheltenham Racecourse has been chosen to stage an evening celebration on 23 May next year, when the Olympic flame arrives in Gloucestershire.

We would like to invite people from across Gloucestershire to take part in this spectacular community event; an unmissable opportunity to celebrate the arrival of the Olympic flame and to share in the excitement leading up to London 2012.

Cabinet member Andy McKinlay said “We are delighted to confirm Cheltenham Racecourse as the venue for this once in a lifetime celebration event. The facilities at the racecourse are second to none, and provide the opportunity for many thousands of local people to come along and witness a moment in history as the Olympic flame lights up Cheltenham.”

The evening will revolve around a free stage show featuring an exciting mix of music, dance and digital media presented by the London 2012 Organising Committee of the Olympic and Paralympic Games (LOCOG) together with presenting partners: Coca-Cola, Lloyds TSB/Bank of Scotland and Samsung. There will also be entertainment showcasing talent from the local community which we will be organising over the coming months. Watch this space for further details. The highlight of the evening will be the arrival of the Olympic flame and the symbolic lighting of the Olympic cauldron.

Sebastian Coe, Chair of LOCOG, said: ‘We have no doubt that Cheltenham will help to stage an evening celebration event that captures the excitement, passion and spirit of the Olympic Torch Relay as it comes to rest at the racecourse.  The event will provide the perfect opportunity to invite the local community to welcome the Olympic flame and shine a light on the culture and heritage of the area.’

The Olympic flame will arrive in the UK from Greece on Friday 18 May 2012 and the 70 day torch relay will start at Land’s End in Cornwall on the morning of the 19 May 2012.  The flame is expected to travel an estimated 8,000 miles across the UK, giving thousands of communities and individuals their moment to shine as the Olympics comes to their doorstep. The flame will arrive in Gloucestershire on 23 May when it will visit Cirencester, Stroud, Painswick, Brockworth and Shurdington on its way to Cheltenham. The flame will arrive at the Olympic Stadium on 27 July 2012 for the lighting of the cauldron at the opening ceremony, signifying the start of the London 2012 Olympic Games.

Details about the timing of the event, how many people will be able to attend, who will be performing and how people can attend are currently being finalised.  More information will be available on the London 2012 website  and in local press nearer to the start of the Olympic Torch Relay next year.