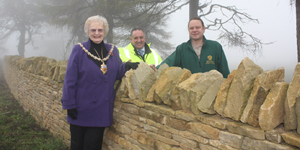 John Rees, environmental maintenance manager opened the ceremony before the mayor of Cheltenham thanked all of those involved with building the wall.

The rebuilding of 1,260m of a 14th century barrier alongside Charlton Kings Common finished at the end of April but Cheltenham borough council wanted to show its appreciation to the many organisations that provided funds to ensure the project could go ahead.

£618,000 was pledged by Natural England, via a European agricultural grant. However, a further 20% of funding was required and the council was delighted when generous donations were given by The Summerfield Trust, the National Grid administered by The Cotswolds Conservation Board and the Cotswold way National Trail.

The project created a lot of local employment for local sub-contactors, local people who wanted to try their hand at drystone walling and it used the local quarry for all the stone. It is also an “impressive landscape feature that runs parallel to a 1300m section of the Cotswold way National Trail” to be enjoyed by visitors and many different people who use the site in a variety of ways.

The Friends of Leckhampton Hill & Charlton Kings Common supported the project from the beginning and Julius Marstrand, chairman of the group said the wall would be used to foster sustainable grazing on the common, which is home to diverse species of animals, insects and wildflowers. 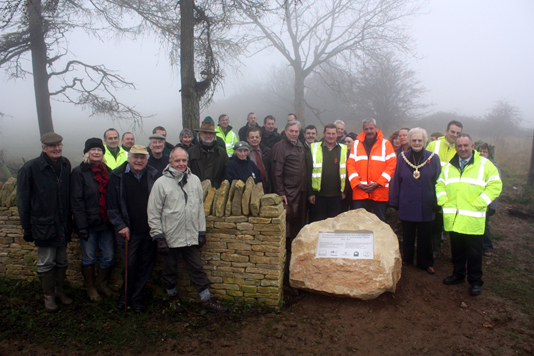