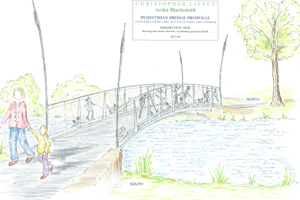 Preparatory work started this week in readiness for installation of the Pittville Community Bridge in Pittville Park, near the boat house.

Construction of the bridge will start this week and next week approach paths will be installed.

The bridge will cost approx. £145,000 and has been jointly funded by Cheltenham Borough Council and Severn Trent. It was designed locally with creative input from black smith and artist, Christopher Lisney who worked alongside local people and school children from Dunalley and Pittville Schools. Their ideas have been interpreted into artistic images which will run along the sides of the bridge.

During an extensive consultation in 2009 in connection with a funding bid to the Heritage Lottery Fund, the reintroduction of a bridge over Pittville Lake was ranked the most popular item of all the proposed design options. The bridge, which is made of galvanised metal, replaces the old wooden bridge that was destroyed by fire over 6 years ago. The bridge has received a special acid wash that will cause its appearance to mellow and weather over the coming months

Councillor Roger Whyborn, Cabinet Member for Sustainability said, “We are excited about the arrival of this bridge as it is needed to replace the old one and appealed to the local residents. It will be a graceful bridge that has been designed to blend in with the park and I am sure it will be an asset to the park.”

The Friends of Pittville Chairman Judy Langhorn said, “We are pleased to see the bridge coming to fruition and look forward to local residents and visitors alike once again being able to enjoy a popular route through Pittville Park”