Day of Action in Cheltenham 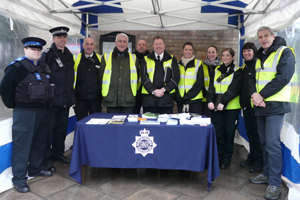 Police, Cheltenham Borough Council, trading standards and the Driver and Vehicle Licensing Agency have been taking part in a day of action in the town.

Police, Cheltenham Borough Council, trading standards and the Driver and Vehicle Licensing Agency have been taking part in a day of action in the town.

On Tuesday January 24 officers took to the streets of Cheltenham in a day long initiative to target those involved in illegal activity.

Cheltenham Borough Council’s community protection team were checking alcohol and food premises in the area to ensure they were complying with the conditions of their licence, including presenting their duty of care certificate to dispose of waste.

Any premises not complying with relevant legislation were dealt with by various means including receiving advice, warnings or the initiation of enforcement action.

They were also patrolling areas including Jenner Gardens, St Marys Churchyard and the Brewery for offences such as dropping rubbish and cigarettes, dog fouling and drinking in public places. The environmental health team were performing routine food and health and safety checks.

A shop on the High Street was visited by Training Standards and Local Policing Team and a large quantity of foreign cigarettes were seized.

Trevor Gladding, community protection manager: “Working in partnership with other agencies helps us to keep areas safe and clean. Our officers undertake high visibility foot patrols in problematic areas to deal with identified issues appropriately including giving suitable advice and possibly the issue of fixed penalty notices where offences take place. We also seek to educate the public about environmental crime and raise the profile of the issue.”

Inspector Tim Waterhouse said: “This was a really positive day and I hope the increased visible police presence was reassurance to all those who were in the town.

“Cheltenham is a safe place and we want to keep it that way. Yesterday was a great opportunity for us to work with our partner agencies to cause maximum disruption to the minority who are involved in crime.”

Officers arrested a total 5 people during the day and carried out three warrants.

One man was arrested on suspicion of possession of cannabis.  The 52-year-old from Cheltenham was charged with possession of a class B drug, he has been bailed to appear at Cheltenham Magistrates Court on February 10.

A woman was arrested on suspicion of shoplifting from the High Street in Cheltenham.  The 32-year-old from Up Hatherley was charged with theft from a shop, she has been bailed to appear at Cheltenham Magistrates on February 24.

Police also stopped a man who was driving in the town; he was found to have no insurance and was fined £200 and given 6 penalty points on his licence.

Over 20 people were also stopped and searched in the prevention of crime.