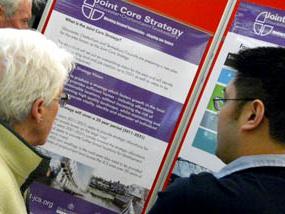 Cheltenham Borough, Tewkesbury Borough and Gloucester City councils would like to thank everyone who took part in the Joint Core Strategy consultation, which closed on 12 February.

Local people were asked to comment on the future development of Cheltenham, Gloucester and Tewkesbury Borough as part of this major consultation, which ran for nine weeks from 13 December 2011. A number of representations were submitted after 12 February and the three councils formally accepted representations received up to 17 February.

The consultation document looked at the potential number of homes and amount of land for employment use that will need to be provided across the area for the next 20 years, as well as those areas that should be protected and enhanced. Comments were invited on a wide range of issues, including the potential locations, the evidence used to produce the proposed housing requirements and on the document itself.

Steve Jordan, Chair of the Joint Core Strategy Member Steering Group, said: "Public input will be vital in helping decide the best plan for our area over the next 20 years. So I would like to thank everyone who has taken the time to give us their views and assure them that each one will be considered".

Over 2,500 responses were received during the consultation period, taking the form of emails, online questionnaires, letters and individual response slips organised by local action groups. Various events were also held with over 700 people attending evening presentations at 10 locations across the area as well as displays in high streets, supermarkets, libraries and even at Gloucester Rugby Club. Feedback made using the interactive boards at these events has also been taken into account as part of the consultation results.

The Joint Core Strategy team is now undertaking the task of collating all of the data received. Having completed this, the team will be able to publish the data in April and subsequently publish any reports generated.

The next stage of the JCS programme is to complete outstanding elements of the evidence base, together with considering all representations submitted during the latest consultation. This will inform the preparation of a preferred strategy which will be considered by Gloucester, Cheltenham and Tewkesbury councils later this autumn. There will be further public consultation before the strategy is put up for examination in 2013. An independently appointed inspector will test the strategy through a public forum to make sure the plans are sound. It is expected that the strategy will be approved in 2014.