All systems are go for Ubico! 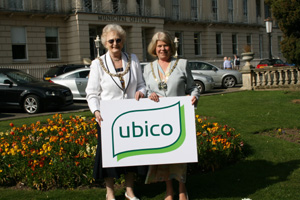 Ubico Ltd, the local authority company which has been set up to provide environmental services in both Cheltenham and the Cotswolds.

The company, which is wholly owned by both Cheltenham and Cotswold Councils, will provide a range of services - including waste collection, recycling, and street cleansing - across both areas.  It is estimated that the company will eventually save taxpayers about £700,000 in annual running costs by delivering efficiencies such as reducing the vehicles required, and optimising the value of recycled materials.

On 1 April environmental services staff from Cheltenham Borough Council transferred across to the company, and they will be joined by their counterparts from Cotswold District Council – and waste collection workers from SITA UK – in August 2012 when SITA UK’s contract finishes in the Cotswolds.

From a resident’s point of view, there will be no material changes to collection arrangements – the same workers will be on the streets and the switch to Ubico should be seamless. The only noticeable difference will be in the Cotswolds where the transfer will pave the way for the introduction of kerbside plastic recycling collections during the Autumn.

Commenting on the launch of the company, Cheltenham Mayor Cllr Barbara Driver said: “It’s great to see the two councils coming together to provide better value for the taxpayer.”

Cllr Carolyn Nicolle commented: “Cotswold District Council already shares ‘back office’ and Audit services with Cheltenham, and the creation of Ubico is another welcome step towards more efficient working.”

Ubico Non-Executive Director Ralph Young was equally pleased: “This is good news for both authorities and there is scope for other authorities to join the company in the future, which would deliver even more savings.”

His fellow Non-Executive Director, Grahame Lewis, added: “I would like to thank all the people behind the scenes who have helped us launch the company on time and within budget.  This has been a really excellent team effort and bodes well for the future.”