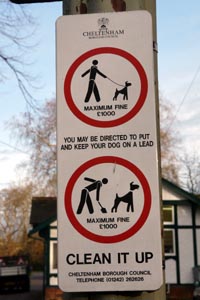 Pupils from St Marks Junior School have recently been involved in a campaign run by Cheltenham Borough Council to deter dog owners from allowing their pets to foul pavements and other public areas.

The community protection team at the council have launched a campaign to educate and seek the cooperation of dog owners to prevent fouling of public areas. This included a visit to St Marks Junior School to alert pupils to the issues of fouling and from that, a poster campaign was created that caught the imagination of pupils from the school.

The Mayor, Colin Hay and Councillor Peter Jeffries, cabinet member for housing and safety selected the four winning posters from the wide variety of those submitted.

The Mayor, Colin Hay, said: "I am so encouraged to see the children taking this issue so seriously and producing such imaginative posters. With such an excellent standard of artwork it was hard to narrow it down to just four winners. I would ask for dog owners to be more responsible and clear up behind their dogs, especially near to school properties."

Duncan Turner, community protection officer, added: "I welcome the enthusiastic way the children went about this project with the posters being used to educate a wider audience. Dog fouling is an issue across the borough and the best way to stop this is to remind dog owners to clean up after their dogs.”

Duncan Turners and The Mayor Colin Hay will be presenting the prizes to the winners at St Marks Junior School on Monday 25 at 09.30am. If you would like to attend please call the communications team on 01242 264154.