How The Kiss came to Cheltenham 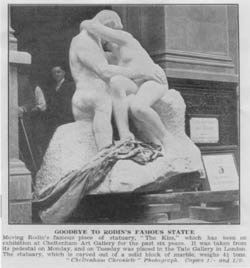 This is the extraordinary story of how Auguste Rodin's sculpture The Kiss, now in The Tate Modern, was for six years in the 1930s in Cheltenham's art gallery.

This most famous version of The Kiss was commissioned by E.P. Warren, a wealthy Bostonian who ran a major art collecting business in Lewes, East Sussex. The price was £1,000 and it arrived in Lewes in 1904.

In 1929, after Warren's death, The Kiss was put up for auction but failed to reach its reserve price. A few years later it was offered by the beneficiary of Warren's will, to any provincial gallery that would pay the costs of transport and insurance. The offer was taken up by Cheltenham in 1933, where it stayed for six years before being loaned to the Tate.

In 1952 the Tate Gallery staged a public appeal to buy The Kiss for the nation. Even then, the sculpture was considered somewhat risqué. Today, The Kiss is an iconic work of art, one of the most popular and most famous exhibits in the Tate Gallery.

The text on this page is adapted from a press release by Lianne Jarrett Associates for a millennium exhibition of The Kiss and other sculptures by Auguste Rodin in 1999 at Lewes, East Sussex.