When the torch came to Cheltenham 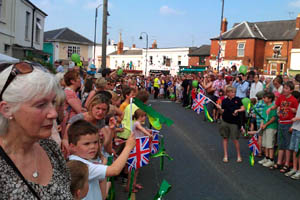 On Wednesday 23 May 2012 there was a once in a lifetime chance to see the Olympic Flame pass through Cheltenham. Local torchbearers were chosen to carry the flame through the town in celebration of their personal achievement or contribution to the local community.

The Olympic flame arrived in the UK from Greece on Friday 18 May 2012 and the 70 day torch relay started at Land’s End in Cornwall.  The flame travelled around 8,000 miles across the UK, before reaching the Olympic Stadium on 27 July 2012 for the lighting of the cauldron at the opening ceremony, signifying the start of the London 2012 Olympic Games.

The torch arrived in Cheltenham on 23 May and was carried on foot from Shurdington Road through the town and on to the racecourse by a series of torchbearers.

Here's a map of the route through Cheltenham:

View a downloadable PDF map of the route through Cheltenham.