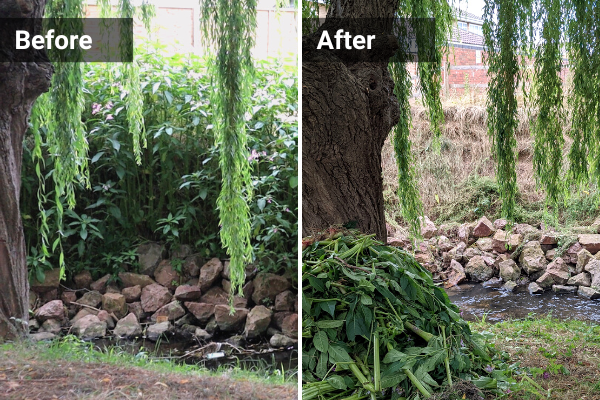 Our green space team are working with volunteers and landowners to remove Himalayan balsam, an invasive plant species, from the River Chelt. Gloucestershire Wildlife Trust are giving training and guidance to help control the spread.

Himalayan balsam is known as a non-native invasive species, and was introduced to the UK in 1839. It's a serious threat to our native flora and fauna as it quickly takes over from our native plant species.

Many native riverside plants have strong roots that remain through winter, binding banks together to stop erosion. Himalayan balsam, on the other hand, dies off completely leaving bare ground.  Banks are then vulnerable to soil erosion and sediment runoff into rivers and streams. The balsam also has high-sugar nectar which tempts bees and other pollinators away from native plants, which are then less likely to be pollinated and produce less seed.

Gloucestershire Wildlife Trust have produced a video giving lots of information about the plant and how to remove it.

The council would like to hear from you if you’d like to volunteer to help with the project, or if you’re a landowner and you’re aware that balsam is growing in your watercourse.