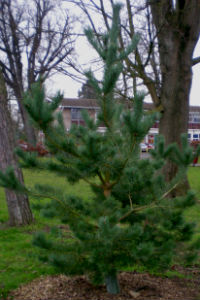 Cheltenham Borough Council has planted 52 trees in and around the town during the recent planting season.

The new trees have been planted mainly to replace those which had to be removed from the council’s parks and green spaces as part of routine inspections. Alongside the more everyday varieties of birches, broad-leaved limes and pine trees, a number of more exotic species were chosen. A Zelkova (an east Asian member of the elm family) was planted in the most southerly part of Pittville park to replace the eucalyptus that died during the very cold winter of 2010, and a Serbian spruce has been included in the mini arboretum on the north-west side of Montpellier Gardens. A Tilia henryana, more commonly known as 'Henry’s Lime' has been placed close to the skate park alongside Evesham Road, continuing the new lime avenue which contains some other exotic limes planted last season.

12 trees were funded by donations from members of the public via our tree sponsorship scheme, and one tree was funded by and planted on Cheltenham Borough Homes land.

Lindsey Mulraine, tree officer at Cheltenham Borough Council, said: “Cheltenham’s trees play an important part in shaping the town’s distinctive character, and our parks and gardens contain many unusual and exotic specimens. Our tree section helps to maintain the green infrastructure of the borough by replacing trees that have to be removed for reasons of public safety, or which have died or been vandalised, and they can also enforce the replanting of trees on private land. The choice of replacement trees will vary depending on the location. For example the arboretum in Montpellier Gardens allows us to plant exotic species for year round interest, whereas only native species will be included in more rural areas, such as Burrows Playing Fields, to encourage native wildlife.”

Further information about Cheltenham’s trees can be found on our tree management pages, including details of Cheltenham’s 'Champion Trees', and the self guided tree walks in Pittville Park.

Full details of some of the more interesting ornamental trees mentioned in the article:

Other tree planting in the town: