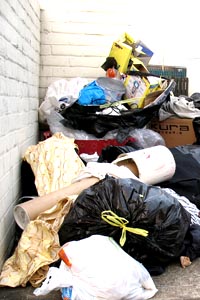 Mr Ridsdale was spotted by a member of the public removing several heavily filled black refuse bags from the rear of his car. He was seen carrying the bags behind a sub-station on Old Gloucester Road and returning to his car, empty handed. The witness reported this to the council for investigation, which included requesting information from DVLA, taking statements from the witness, photographing the evidence on site, in situ, and interviewing the defendant.

The council decided that prosecution was proportionate due to the scale of fly tipping. In court, on Monday 16 November 2015, Mr Ridsdale expressed remorse, and said he has since changed his behaviour by disposing of controlled waste properly.

Mr Ridsdale pleaded guilty to an offence of depositing controlled waste without a licence/permit to do so. He was given a reduced fine of £230 because of his early guilty plea and ordered to pay costs of £400, Criminal Court Charge of £180 and a £23 Victim Surcharge. A total of £883.

Clive Evans, community protection officer for Cheltenham Borough Council, said: “Fly tipping is unsightly and can be detrimental to areas where it is left. The court’s verdict shows to others that fly tipping of any waste is unacceptable and that we will take the appropriate action when we have sufficient evidence to proceed with a case.

“Cheltenham Borough Council has a recycling centre on Swindon Road where members of the public are able to take waste for recycling.”

Councillor Andy McKinlay, cabinet member for development and safety, added: “The dumping of waste in public areas is completely unacceptable, it is both unsightly and potentially dangerous.

“We will continue to prosecute anyone found to be carrying out this sort of illegal activity. The size of fine handed out by the court to Mr Ridsdale should serve as a warning to any one engaged in fly tipping."

The maximum fine for fly tipping is £50,000 and/or up to six months imprisonment. More information and details on how to report fly tipping can be found on the council’s website.