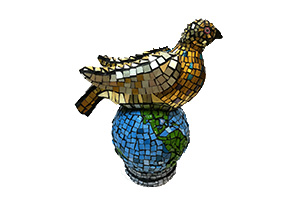 Pigeon finials from Cheltenham’s old sign posts go on display next month at a free exhibition from Thursday 7 March to Thursday 28 March 2019,

When the traditional iron signage around the borough was replaced by modern ‘wayfinding’ fingerposts and maps in 2018, the pigeon finials were saved for future use. Cheltenham Borough Council approached freelance art coordinator Niki Whitfield, to commission artists working locally to artistically embellish the pigeon finials in their own styles.

Niki Whitfield, says: “I’m really pleased the pigeons will be flocking together for a show at the Wilson. It will give people the opportunity to see the diversity and beautiful detailed work and decoration on some of the birds up close before they’re relocated around the town centre.”

Councillor Steve Jordan, leader of the council, says: “This three week exhibition celebrates the lowly pigeon which plays a big part of Cheltenham’s history. We’re pleased that artists with a connection to Cheltenham have taken up the challenge to reinterpret these finials to be enjoyed by our residents and visitors.”

The exhibition will be supported by interviews with the artists and photos of Cheltenham taken by University of Gloucestershire students, as well as a chance for visitors to have a go at decorating their own pigeon cut-out for display.

Sarah Robertson, director of programmes and engagement at The Cheltenham Trust, says: “The Wilson Art Gallery & Museum is delighted to be working with Cheltenham Borough Council  and students from the University of Gloucestershire on this exciting project that raises the profile of the engaging story of the founding of Cheltenham as a Spa Town. The Wilson is the home of Cheltenham’s fantastic museum collections that cover the town’s social history, the Arts & Crafts movement and Edward Wilson, the world renowned explorer, physician, natural historian and painter. The Wilson also runs a programme of nationally-important exhibitions: “The Art of Selling Songs”, on loan from the V&A museum in London, runs from 16 March to the 2nd June.”

Following the exhibition, the pigeons will ‘take flight’ to various locations in and around Boots Corner for people to find as part of a trail. These locations have yet to be determined, but we expect the pigeons to begin ‘landing’ shortly after the exhibition finishes.

Notes:
Materials produced for the event will stay on display at The Wilson for a number of weeks after 28 March.

Pigeons have been part of Cheltenham’s history since the original spa was first discovered in 1716 when particularly healthy pigeons were seen pecking at salt deposits from a natural spring, showing off its special qualities.

More on Cheltenham’s history can be found within the Cheltenham History Collection at The Wilson Art Gallery and Museum, please visit https://www.cheltenhammuseum.org.uk/collection/local-history.

The traditional iron signage around the borough first started to be replaced by modern ‘wayfinding’ fingerposts and maps in 2014. Pigeon finials were also recovered during this time, and eleven were auctioned, raising £1,895 for the mayor’s charities at the time.