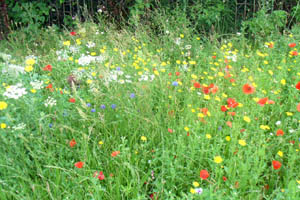 To support biodiversity, we have created diverse grassland habitats in many of our green spaces. Pittville Park, Benhall Open Space, and Springfields Park are just a few where extensive natural grassland is supporting bird species where they hadn't previously existed. Sometimes it's as simple as allowing grass to grow long which gives valuable pollinating insect populations a chance to grow.

Last year we made a commitment to reduce the amount of weed spraying by at least half to protect the insects and bees and support our environment, and that is just what we're doing. We started to weed spray targeted areas across the town from week beginning 14 June. Please click for more information on our alternatives to weed spraying.

Weed spraying has now been completed in all areas across the borough as seen on the master map.

Since January this year, Ubico, the council’s environmental services provider, has been tidying up the worst of the weeds across the town by using our new weed ripper which avoids the amount of weed spraying we have to do.  Most recently the weed ripper has been in the Warden Hill and Hatherley area. The weed ripper is a very effective tool we can use to control weeds, although there are other things we're doing to reduce the amount of weed spraying needed. During 2020 a lot of effort was put into a trial of various different methods of weed control to avoid weed spraying and we are still trying to find the most envrionmentally friendly method.

From week commencing 02/08/2021 our weed ripper has been clearing away weeds in the below areas.

The above areas are now complete and the crews will now move onto the areas listed below. Others areas will be added to the below list as they progress around the town. 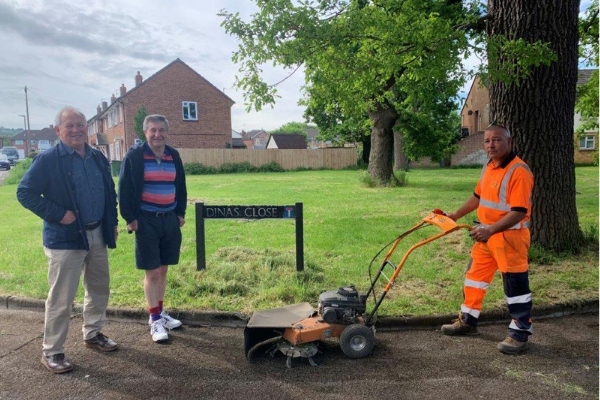 To reduce weed growth in gullies on roads, Ubico has continued to sweep the roads with the mechanical road sweepers which not only gets rid of dirt and debris on the edge of roads but also stops germination of more weeds.

From the end of June you will notice the Ubico strimming crew out and about tidying up the weeds and long grass around street furniture – roads signs etc.  They will be starting in the town centre and moving out of town down Lansdown Road, up London Road and into Charlton Kings, Leckhampton, part of Shurdington Road and Warden Hill before moving on to the rest of the borough.

The crew has already been out strimming in Priors Park and Windridge.  Ubico are also out spot strimming the worst areas which crop up every year – parts of Springbank, and roads off Princess Elizabeth Way including Kingsmead Avenue, Dormer Road and Redgrove Road.

Areas of long grass on highway verges will be cut down by the end of June but any areas of wildflower planting may be left long as this is part of its management plan. Those areas of grass where you see daffodils growing in the spring are left until the end of June before the grass is cut down to help produce a good display of flowers the following spring.

Ground flailing (cutting) the large stretches of grass verges on semi rural roads will be starting at the end of June too and this will be repeated in October.

Hedge cutting started on 9 August 2021 and the following roads are due to be addressed. Please note bird nesting season has now finished but if any evidence of nesting is seen the works will be suspended as per Section 1 of the Wildlife and Countryside Act (1981).

Alleyway clearance (for example mowing and strimming) started week commencing 12 July 2021. Most alleyways have now been cleared, please see below for the remaining alleys to be completed over the next month.