History of the Gardens 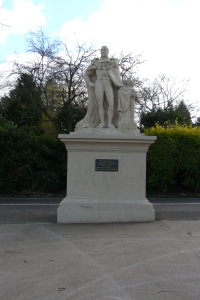 The development of Montpellier Spa and estate was carried out at the beginning of the 19th century by Henry Thomson on a site originally known as Trafalgar Field. In 1809, Thompson built the first pump room, a rather primitive structure which was pulled down in 1817 and the present building erected. Eight years later the architect, John Papworth, added the domed circular room which became known as the Rotunda. The interior was used as a ballroom, graced by the presence of the Duke of Wellington and many of his distinguished contemporaries.

The gardens were originally developed as pleasure gardens to provide an appropriate setting for the pump room and for society to meet and promenade. Although open to the public on payment of an admission fee, the gardens were mainly frequented by those taking the waters. By the 1830s, the gardens were home to a glass house filled with exotic plants, a Chinese pagoda with integral bandstand and an ornamental fountain.

The change towards public ownership in the late 19th century saw pleasure gardens become places of public amusement, recreation and resort. In 1864, the bandstand was constructed, quickly becoming a popular facility with regular concerts. The proscenium building, built at the turn of the 20th century, provided a venue for theatrical and other cultural events. Sports facilities, including lawn tennis, archery and croquet, were also introduced. Six all weather tennis courts remain while the Cheltenham Croquet Club moved to its own grounds in 1920 and is now the premier club in the country hosting the 2005 World Championship.

In 1893, Cheltenham Borough Council purchased Montpellier Spa and its gardens for £7,400. The history of the gardens during the 20th century was dominated by World Wars 1 and 2 when they were appropriated for the war effort and used for training, exercise and cultivation as part of the 'Dig for Victory' campaign. By 1955, the gardens were laid out in their present form and few changes occurred until the early 21st century. The rotunda was restored by the council and Lloyds Bank in the early 1960s and in 1994, the Civic Society initiated restoration of the Bandstand.

Extensive restoration and development of the gardens was made possible in 2006 by the award of a substantial grant from the Heritage Lottery Fund's Public Parks Initiative programme and a significant contribution from the borough council. The restoration has ensured that Montpellier Gardens will continue to play an important part in the lives of residents and visitors alike well into the 21st century.