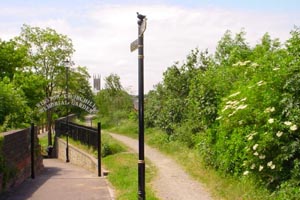 As part of improvements to the Honeybourne Line, we have been able to secure external funding to remove the conifers along the main footpath boundary between the play area open space to the end of the Travis Perkins yard.

This work will commence from 9 February between 9am and 5pm for approximately two weeks. A more appropriate scheme will be planted along this boundary in Autumn 2015 when it is best to plant mature trees.

Information signs will be put up at each entrance to the Honeybourne Line.

The old Honeybourne Line runs from the Prince of Wales Stadium, Tommy Taylors Lane, into the railway station at Queens Road and was formerly the railway line connecting Cheltenham and Honeybourne, Worcestershire.

The line is a popular cycle route linking Wymans Brook and the railway station.

It is an important wildlife corridor and small mammals and foxes are frequent visitors. Many species of butterfly including a Small Blue colony have been seen along the line and it has a selection of common native plants usually associated with disused railway lines.

Improvement works along the Honeybourne Line were completed in 2005 when lighting was installed and resurfacing carried out. Overgrown vegetation was also removed or cut back from the footpath and cycleway as part of a ten year management plan to encourage nature conservation along the line and also to make it more appealing and attractive to walkers and cyclists. Works to extend the path into the railway station was completed in Spring 2006.

The work was undertaken by Cheltenham Borough Council and was funded from the county council's transport budget and also partly from contributions made by GCHQ as part of their development at Benhall.